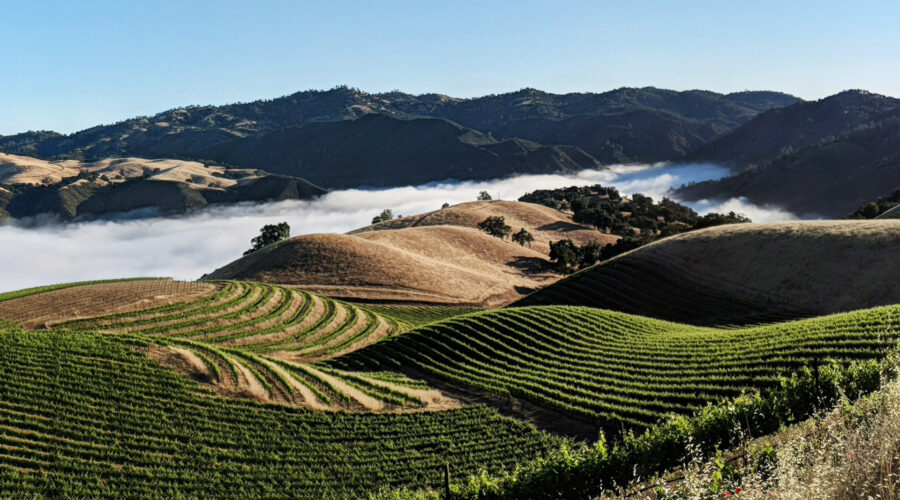 California’s literary history runs deep in the Gabilan Mountains, which John Steinbeck portrayed in his 1952 epic East of Eden as “full of sun and loveliness and a kind of invitation, so that you wanted to climb into their warm foothills almost as you want to climb into the lap of a beloved mother.” But vintners were climbing into these mountains east of the Salinas Valley as far back as 1919, when Frenchman Charles Tamm planted the Chalone Vineyard. Then in 1975, these remote ridges were exalted enologically yet again, when Calera Wine Company founder Josh Jensen bet that quality Pinot Noir could grow atop the limestone soils of Mt. Harlan.

Now, the name “Gabilan Mountains” is an official part of the global wine lexicon, as the federal government just approved the 98,000-acre area as an American Viticultural Area. Straddling the slopes between Monterey and San Benito counties, from south of San Juan Bautista to east of Soledad, the roughly 30-mile-long appellation is primarily defined by its high elevation: 2,370 feet on average, and no lower than about 1,500, keeping the vines above the soupy fog that soaks most of Monterey. The granitic soil is another uniting factor, pockmarked with pockets of true limestone and chunky white streaks of calcareous shale.

So far, only six commercial vineyards, amounting to 436 acres, exist within the boundaries, which abuts Pinnacles National Park on its southeastern flank. All but one of those properties are within the existing appellations of Chalone (established in 1982) and Mt. Harlan (1990). Those regions were unaffected by the new appellation, except that winemakers can now opt to use “Gabilan Mountains” on their label instead of, or in addition to, those historic designations.

The 30-acre Coastview Vineyard is the lone planted property in the region outside of Chalone and Mt. Harlan. Its owners petitioned for the new appellation—which only received two public comments, both positive—and they stand to benefit the most from the new name.

“The reason was to recognize this whole mountain range as a collective unit,” said Parker Allen, whose father, John Allen, planted the vineyard in the 1990s. They sell Syrah, Pinot Noir, Chardonnay, Grenache and Bordelaise grapes to a half-dozen or so producers each vintage, primarily wineries in the Santa Cruz Mountains, Monterey, and Paso Robles.

“We get these really intense flavors because the granite soils are so thin that the vines have to dig deep into the earth to reach the water,” says Allen, who worked on the petition for four years. “You get these really high-stressed grapes that produce intense, bold flavors that really stand out from the valley floor grapes.” The dramatic diurnal temperature swings from hot, arid days to very cool nights only amplify those qualities.

“The reason was to recognize this whole mountain range as a collective unit.”—Parker Allen, descendant of Coastview Vineyard original farmer

Bradley Brown of Big Basin Vineyards started buying Coastview fruit in 2007 and sparked the idea of creating an appellation with the Allens about eight years ago. He won early support for the idea from Calera’s Josh Jensen, who saw the marketing advantage of having his Mt. Harlan vineyards be part of a larger geographic region.

“It was absurd to label [Coastview Vineyard bottlings] as Monterey County when it was like nothing else from Monterey County,” says Brown, whose own estate is based high up in the Santa Cruz Mountains. “The Santa Cruz Mountains was the very first elevation-defined AVA in the United States. This is the next mountain range along the San Andreas Fault to the south, so it’s cool that these two are elevation-defined, multi-county AVAs. It’s been a long time coming. To be able to label as ‘Gabilan Mountains’ is extremely gratifying.”

It’s unclear how popular the Gabilan Mountains designation will become beyond those wineries buying fruit from Coastview. Down in Chalone, both Chalone Vineyards and Brosseau Vineyard plan to keep using the Chalone AVA, where Pinot Noir and Chardonnay dominate alongside increasingly popular Rhône varieties.

The same can be said for Calera winemaker Mike Waller, who will stick with Mt. Harlan on the brand’s estate bottlings of Pinot Noir, Chardonnay, Aligoté and Viognier. But he’s open to future usage, saying, “[That’s] not to say one day we won’t make a wine with the Gabilan Mountains AVA.”

There’s plenty of open grazing land in the region that would be suitable for future vineyards, but the dry climate is a limiting factor. “It’s very difficult to get water up to these elevations,” notes Allen.

Brown hopes the Gabilan Mountains appellation will generate more interest in the area. “At least it puts it on the maps for some people who only knew it through Chalone or Calera,” says Brown. “This binds all of those great stories together into one geographic whole.”

The designation becomes official on September 14.