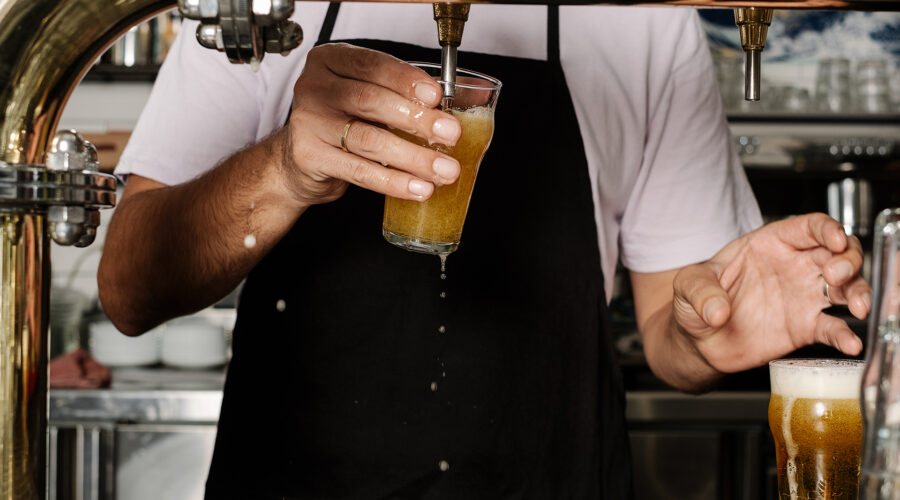 The Wildest Flavored Beers and the Brewers Behind Them


In the early days of Eleven Madison Park, Augie Carton would regularly sit at the bar and order the five-spice duck, a signature dish from Chef Daniel Humm. Adorned with cumin, coriander, lavender, red Sichuan peppercorn and honey, it would be served with seasonal fruit: strawberries in summer, apples in the fall, fig and plums in the winter. And that is where beer inspiration struck for Carton, who had recently opened a brewery in New Jersey.

The wheels began to turn: Belgian Candi sugar and Special B malts can evoke flavors of stone fruits. What if those were used in a strong winter warmer ale, akin to a Belgian quadruple? With the chef’s spices—could the beer evoke the flavors of the dish and accompanying fruit? He did just that.

“It comes from the idea of gastronomic deconstruction,” says Carton. “We were deconstructing what was going on in terms of taste and aromatics and trying to fill that in.” The beer, an homage (or a decoy), has been released several times now in the colder months and is known as This Is Definitely Not a Fake Duck.

It’s becoming increasingly popular for breweries to take food items—really anything you can think of, from chocolate cake to Swedish fish or even whole chicken parmesan sandwiches—and add them directly to the grain bill of the beer or during fermentation to let those flavors infuse into the brewing beer.

It is a polarizing process to be sure. There are purists who deride any gimmicks in their pints, then there are those who are tickled by the whimsy and delighted by the results.

“Beers brewed with the addition of unusual ingredients can be surprisingly delightful. When tasting these beers, I expect to be able to perceive the featured ingredients, and I expect them to be in harmony with the malt,-hop- and fermentation-derived notes in the beer,” says Mirella Amato, a craft beer and sensory consultant who is also a Master Cicerone and Doemens Biersommelier. “Beer is well-balanced and moreish by design. Adding fun ingredients should not take away from these qualities.”

There are a handful of brewers such as Carton (who is also the co-host of the Steal This Beer podcast with this writer) taking individual ingredients and using them in inventive ways throughout the whole brewing process to evoke sensory memories of food. From spices and sugars to herbs and grain, it is possible to taste food in your beer without there being actual food in your beer.

There are also the four main ingredients of beer to consider and the individual flavors they provide. Water can be hard or soft, have mineral content, be salty or even a bit sulphury, at times.

Malts bring a host of flavors that can evoke cereal grain or country bread or caramel. Darker kilned malts can taste like coffee or chocolate or toffee. There are smoked malts that add a lovely bacon flavor to lagers and porters. Grains like rye add spiciness. The familiar flavors of wheat, corn and rice add those flavors when added to a beer’s grain bill.

Hops have evolved in recent decades with farmers and breeders bringing a multitude of aromas and flavors to each freshly picked bine. Classic hop varieties are known for spicy or earthy aromas, but more modern varieties run the gamut of flavors—from a marijuana-like dankness to fresh citrus fruits like grapefruit, lemon, lime and tangerine. Tropical aromas from hops include pineapple, guava, mango, passionfruit and kiwi. There are hops that smell like peaches, blueberries, strawberries, even cedarwood.

Yeasts can bring lively aromas to a beer including those of banana, bubblegum, clove, honey, flowers, pepper, leather, tobacco, sweet fruits, tart fruits and nuttiness. So brewers have a broad palette to paint without adding actual food to their beers. That doesn’t mean everyone is stopping there.

Finding ways to bring specific ingredients together to create a beer that evokes a creamsicle or a piña colada or gingerbread is no mean feat for the brewers looking to undertake them. The goal is not to create a carbon copy but rather offer a suggestion or nod toward the original.

Still, there is a whole subset of the modern brewing industry that is looking for full recreation, not subtle suggestions. The use of fruit purees, syrups and lactose can conjure “smoothie” beers that taste just like they came from Jamba Juice (but with an abv). Some breweries have recreated breakfast cereals using milk sugar and actual flakes but in a filtered can form.

Instagram is filled with posts from brewers around the world adding dozens of doughnuts into a beer, or chocolate bars, chicken wings, pickles—even full thanksgiving dinners. There is a certain wow factor that goes into seeing those posts. Final reviews can be … mixed.

And if a brewer puts enough candy into a beer (you can find breweries that have familiar checkout-aisle-brand confections delivered by the pallet) it will taste like that candy.

Carton has made those beers, too, but in his own way. A recent collaboration beer made with Turkish delight saw the brewing teams making their own gel candy rather than buying from the shelves. It was similar to a beer brewed with red licorice. “It means I can dial in the flavor of my additive,” says Carton. “If I want my licorice to be more raspberry than strawberry, I can change the controls and design a different construction.”

Chef Jensen Cummings and his team built an entire series of collaboration beers out of using yeasts and traditional ingredients to create familiar flavors that translated into the glass.

“It was yeast characteristics and fermentation that were the foundation of the profiles we developed,” he says of the Good Bugs Fermentation series that produced roughly 50 beers before COVID hit. “There was some use of adjuncts to amplify those expressions, yet for the most part it was reimagining the potential of basic brewing ingredients as building blocks of these recipes.” One such recipe, created in collaboration with TRVE Brewing Company in Denver, was inspired by soy sauce ferments, Chef Cummings says. The beer used several dark malts as substitutes for koji (a fungus grown on cooked grain, usually rice, involved in fermenting soy sauce).

“At a certain phase of fermentation, it had this intense aroma of moldy blueberries left in the sun to bake, but in the best way possible,” he says. “And we aimed to recreate some of those unique characteristics in a beer.”

Another collaboration with a different Denver brewery, Great Divide, through fermentation and a deft use of hops created a beer that carries an intense mango profile without the use of mango. It is now available on shelves as Heyday Modern IPA.

“They had never built a recipe with the yeast and fermentation as the foundation of the brew,” says Cummings. “This is the great white space that exists in the future of brewing,” he adds. “Yeast, fermentation and culinary expressions, with no food in the beer.”

There is also the question of pairing when it comes to culinary beers.

“These beers can, of course, be a lot of fun at the table. There is a beer for every food and a food for every beer. This being said, an easy trap to fall into is to pair these beers with their food counterpart, which can work and is an interesting experiment, but it’s not always the most compelling pairing,” says Mirella Amato, who is also the author of Beerology: Everything You Need to Know to Enjoy Beer… Even More. “Would you pair orange juice with an orange? Probably not, it’s a lot more exciting with brunch. When pairing these beers, it’s fun to seek out foods that complement the feature ingredient rather than matching it exactly.”

Carton agrees. With his Definitely not a Fake Duck, he says there would be no sport in pairing that 12% abv beer with the dish that inspired it, even if Humm were still making it. Instead, he thought about what the dish was served with beforehand (gougères) and after (blue cheese) as better accompaniments.

Pairings can be personal. A beer that tastes like a bowl of fruity cereal often associated with a modern Stone Age family might taste great with a side of bacon, as part of a complete breakfast. A pickle beer could be a fine accompaniment to a deli sandwich. That red licorice beer might hit the spot after a few bites of black licorice.