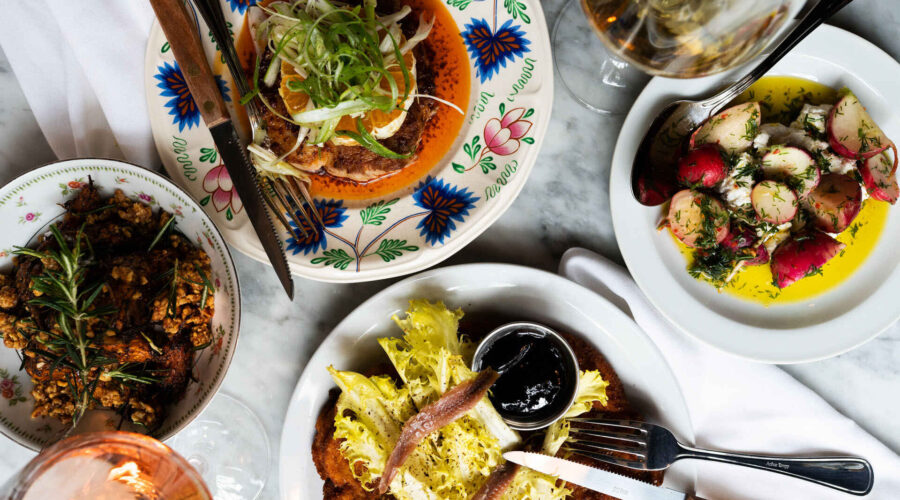 
Chef Jeremy Salamon knows where to find the stash of Hungary’s best-known wine when he visits his family in South Florida. “My grandmother has a cupboard dedicated to Tokaji,” he says. But like many chefs in the United States with roots in Eastern Europe, Salamon has explored more bottles of the region than just the sweet stuff.

Salamon is the chef and owner of Agi’s Counter, which opened in late 2021 and was named after his grandmother. The Brooklyn-based restaurant serves food influenced by Hungarian classics and Jewish diner food. Think dishes like palacsinta, a Hungarian-style crepe, with maple and fruit compote; pastrami tongue and cabbage; caraway Caesar salad; and confit tuna melts.

But what makes Agi’s Counter special is it happens to have one of the United States’ only exclusively Hungarian wine lists. There are varied bottles, from the classic sweet Tokaji Aszú to more unique pours of Hárslevelű pét-nat and Kékfrankos rosé.

“We’re trying to get people not to use Tokaji as a default,” says Salamon. “It’s just like paprika. When you think of Hungarian food, most people are like, ‘Oh, paprika.’ But there’s more to it than that.”

Encountering Hungarian food and wine side by side is a rarity in the United States. But restaurants like Agi’s Counter are proving that there is so much to learn about one of Eastern Europe’s greatest wine regions.

A Brief History of Hungarian Wine

Hungary’s winemaking history is complicated—and ancient. At a bridge between Eastern and Western cultures, early Hungarian winemaking was influenced by the Caucasus and overlaid with Roman viticulture practices.

Fast forward to the Renaissance, and Hungarians developed sweet Tokaji Aszú wine while under Turkish rule. In 1720, the Tokaj region became the world’s first to classify vineyards, even before Port and Bordeaux. By the late 17th century, France’s King Louis XIV, popes and other power brokers were all drinking it.

However, an outbreak of a grapevine pest called phylloxera in the 1870s wasn’t kind to Hungarian winemakers, nor were the world wars. The country lost borderlands after World War I and emerged from World War II as part of the Eastern bloc, at which point a government monopoly took over winemaking.

But the isolation of the Eastern Bloc also held back the encroachment of international grape varieties and technical, interventionist winemaking practices. As a result, Hungary has original grape varieties but makes wines “in a modern style,” says Cournot.

Cournot has experienced Hungarian wine on multiple menus over the years. He poured his first of these 20 years ago at Danube, David Bouley’s Michelin-starred Austrian restaurant. On a list dominated by Austrian wines, the restaurant’s selections of dry Tokaji and occasional bottles from the Northern Hungarian city, Eger, filled the program’s value niche.

“I found Hungarian wine was a much more evocative pairing with Indian food, rather than Riesling,” he says. “Hungarian wines offer smokiness, depth and boldness. The whites have full-bodied intensity and are made from grapes that weren’t manicured or bred for purity of flavor.”

Now, Cournot has filled Ruffian’s wine list with Hungarian bottles, which comprise a quarter of the selections for three months a year. Additionally, another six or so wines on Ruffian’s list come from Hungarian winemakers working in other countries.

Moreover, Kate Lasky and Tomasz Skowronski, owners of Apteka, a vegan Polish restaurant in Pittsburgh, are particularly drawn to small wineries in Central and Eastern Europe, many of which are sourced from Hungary.

“We don’t shy away from being a Polish restaurant, but we see it more broadly. A lot of borders changed. Countries disappeared for 100 years,” says Skowronski, a first-generation Polish American.

According to Skowronski, Poland and Hungary have strong cultural ties and overlapping culinary traditions. So much so, there’s even a saying that roughly translates to: “Pole, Hungarian—two good friends, together they battle and drink their wine.”

But even more than regional affinities, Lasky and Skowronski are drawn to Hungary’s prototypical small wineries that mirror Apteka’s hands-on, DIY ethos. “That speaks to us, getting a product that’s really connected to the people making it,” says Skowronski.

Hungarian wine importer Athena Bochanis founded Palinkerie in 2013 with a 100% Hungarian portfolio and has also seen an increase in desire for Hungarian wines. She attributes this to the growth in interest in natural wines. Natural winemaking practices are inherent to many of these mom-and-pop operations, she says. Until recently, she notes, “no one had taken [Hungarian wine] seriously enough to make it their focus.”

Her early accounts consisted of restaurants with hip wine lists (New York’s Roberta’s, Terroir and the now-closed Betony), plus Michelin-starred Tokaji buyers (New York’s Daniel, Eleven Madison Park and others). “Now, any place with a legit wine program is our client,” says Bochanis.

From Italian to Japanese Fare, a Perfect Pairing

Food may be the best gateway to Hungarian wines, says Bochanis. “Hungarian wines, with the way many are made on the lees, have at least medium body. They are dry-dry and have good acid. They’re meant for food,” she says.

And this love of Hungarian wine goes beyond Eastern European menus. At Misi, a contemporary Italian spot in Brooklyn, sommelier Madeline Miller rounds out her mostly Italian list with seven-plus Hungarian selections. At least three of her picks are Kékfrankos (also known as Blaufränkisch), a bright, fruit-driven, “Pinot noir-adjacent,” herbaceous grape and her favorite Hungarian variety.

“One of the reasons I really fell in love with Hungarian wines is that they’re so terroir-driven. People are so excited about small plots and hillsides in a way that reminds me of how some Burgundian producers talk about three rows of vines,” says Miller.

Kékfrankos, in particular, works with Misi’s vegetable-focused, high-acid dishes like roasted eggplant with Calabrian chiles. For dishes that call for a richer white, like marinated leeks with anchovy or sheep’s milk cheese-stuffed pasta with bottarga, Miller unleashes a high-acid yet honeyed Hárslevelű.

And when it’s built into Nakazawa’s $120 pairing option, Fuerth gets the chance to introduce diners to wines they normally wouldn’t select on their own.

“Not to get too lowbrow about it, but with bluefin, it comes down to the steakhouse pairing. If you think about the composition, it’s a starch and a fatty piece of meat,” says Fuerth, noting that the wine’s umami spiciness plays well with the fish’s iron qualities.

This summer, Fuerth visited Hungary to meet István Szepsy, one of the country’s most notable winemakers and heir to a 400-year winemaking history in Tokaj. “We were drinking Furmints from single vineyards—world-class wines, arguably the Montrachet equivalent of dry Furmint,” he says. “Yet no one is clamoring for Furmint. I don’t know why.”

If you spot a Hungarian bottle at a wine shop, it’s a safe bet that it will pair with smoke, spice, fruit, meat and earthy ingredients like root vegetables and mushrooms.

At Ruffian this fall, Cournot poured Hárslevelű and Juhfark alongside smoked vegan root vegetable dishes. Especially when those grapes hail from the volcanic soils of Somló, “everyone’s cult-favorite region,” according to Cournot, they can also stand up to lamb and spice, he notes.

Additionally, Lasky and Skowronski say Hungary’s aromatic fields blends (one of their favorites is a Furmint Hárslevelű/Sárgamuskotály from Flow) can fill in for a Grüner Veltliner with ease and stand up to smoky, fermented, pickled dishes. Kékfrankos, they say, “feels right with rye bread” and earthy mushrooms.

Perhaps tellingly, Salamon’s favorite food and wine combination at Agi’s Counter is a tuna melt with a 100% Olaszrizling orange wine from Jász Laci in the Somló. Together, the decidedly un-Hungarian dish and new-school Hungarian wine yield an all-American tasting note.

“It teeters between orange and white wine,” says Salamon. “It’s floral and citrusy like ambrosia, like a Dole fruit cup, but in a great way,” he says.

Hungarian wines, it turns out, have met their match with American cooking.