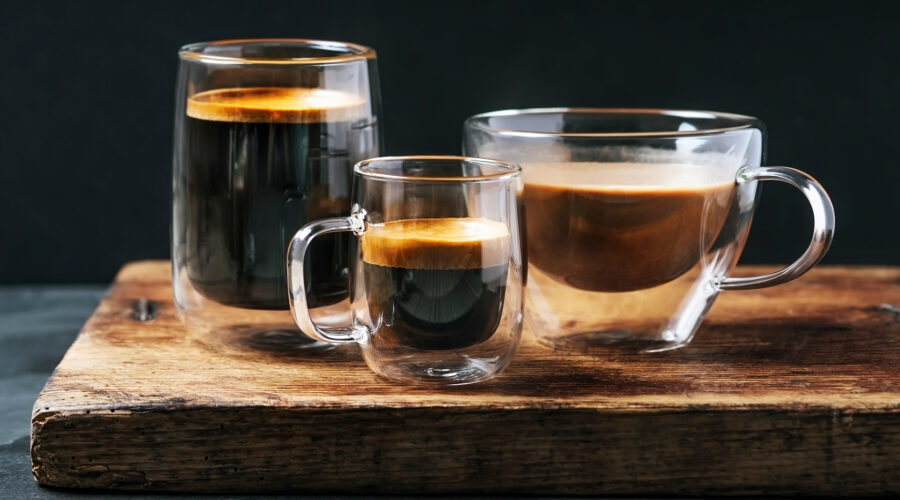 What’s the Difference Between Espresso and Coffee


As U.S. coffee culture continues to evolve, certain fundamentals still have many scratching their heads or searching online surreptitiously for answers.

Take espresso. What’s the difference between espresso and coffee, really? Is espresso coffee, or are the beans or roasts somehow different?

Turns out, these are trick questions. Coffee and espresso are the same thing, prepared in distinct ways.

Here is a guide to the similarities and differences between coffee and espresso, from roasting and brewing to caffeine content and history.

The Origins of Coffee and Espresso

The earliest known coffee plants hail from modern-day Ethiopia, circa 850 A.D. Some trace the first roasting and grinding efforts to 15th-century Sufi monks in Yemen who “prepared an infusion of coffee cherry leaves to stay awake and pray through the night,” writes Giorgio Milos in The Atlantic.

In the early 1500s, the Ottoman Empire brought coffee far and wide. Western Europe was a relatively late adopter, in part because its kings and Pope initially resisted coffee. By the 17th century, however, coffee houses sprouted in Venice (1645), England (1650), France (1672) and beyond.

Using Moriondo’s model, manufacturer Luigi Bezzerra and developer Desiderio Pavoni created a “cafeé espresso” machine that debuted at the 1906 Milan Fair. Throughout the 20th century, other manufacturers tinkered with their model to create sleeker machines with more user-friendly processes that resemble what baristas use today.

Best Roast for Coffee vs. Espresso

Whether coffee drinkers choose light, medium or dark roast beans is a matter of preference. However, beans sold for espresso are usually dark, since their richer, less acidic flavors are better suited to the espresso-making process.

“Espresso beans and coffee beans are essentially marketing efforts,” says Sahra Nguyen, founder of Nguyen Coffee Supply. “Roasting companies will label a bag of coffee beans as ‘espresso beans’ or ‘drip coffee’ based on what they believe would be an optimal flavor experience for the consumer, given the difference in extraction methods.”

Extraction is a tricky yet useful term. It’s the percentage of dry coffee bean particles that dissolve due to the way the cup was brewed.

The Process of Making Coffee vs. Espresso

How you grind your beans, the temperature of the water and the ratio of coffee to water all affect the taste and texture of coffee and espresso.

Espresso, on the other hand, is made with finely ground beans (.3-millimeter particles).

Espresso machines vary, but they typically heat water to 190–196°F and can use anywhere from 8–19 bars of pressure. Coffee uses low pressure and water heated to approximately 195–205°F.

Vince Nguyen believes the process of brewing coffee is more forgiving, too.

“A big difference between espresso and other coffees is the precision needed to brew a good shot,” he says. “The quality of the espresso shot depends on water temperature, water pressure, coffee bean type, coffee grind size, total extraction time, air humidity and even the pressure used to tamp the grounds into the portafilter.”

Amount of Caffeine in Coffee vs. Espresso

Espresso and coffee start with the same beans, so one drink isn’t inherently more caffeinated. What affects caffeine content is bean variety, roast style and extraction method, says Sahra Nguyen. “Generally, the longer and darker you roast coffee, the less caffeine there is.”

The two main varieties of coffee beans, robusta and arabica, have differing caffeine levels. Robusta clocks in at 2.5% caffeine versus arabica’s 1.7%.

“But who stops at one ounce of coffee?” writes Catherine Roberts in Consumer Reports. “A more common scenario is downing at least eight times that much.”

She has a point. A shot of espresso is one ounce, while standard coffee servings start at eight ounces. Depending on your beans, darkness of your roast and extraction method, an eight-ounce cup of coffee can contain 95–128 milligrams of caffeine. If you tend to reach for a second cup, you can easily consume three times the caffeine found in one espresso.

Another differentiator between coffee and espresso is crema. That’s the foam that floats atop a shot of espresso. Crema isn’t present in a cup or carafe of coffee. Coffee professionals evaluate the caliber of beans and skill of their barista based on an espresso’s crema.

“Crema is the first thing you see before drinking an espresso,” says Vince Nguyen. “In a good shot of espresso, the crema’s texture is beautiful and includes colors like light gold and caramel.”

Whether you pour coffee or pull an espresso, there’s beauty in every cup.