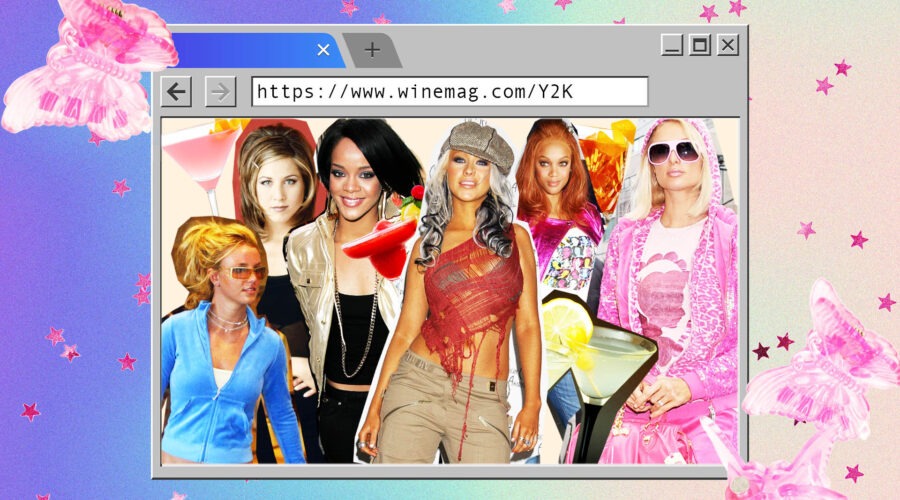 
Instead of saying “Bye Bye Bye” to low-rise jeans and matching velour tracksuits, someone is bringing Y2K fashion back—and it isn’t Justin Timberlake.

Shorthand for “the year 2000,” Y2K originally referred to a computer bug that created widespread panic for the new millennium. Today, the term also refers to the modern embrace of the culture of the late 90s and early 2000s, which has exploded across TikTok largely thanks to Gen Z. With hashtags like #Y2KAesthetic and #Y2KFashion going viral, it seems fitting for #Y2KCocktails to have their moment, too.

Like fashion, popular drinks from this era blend futurism with a slightly retro edge. Whether you’re a slave for double denim or find Appletinis “Toxic,” here are 10 boozylicious cocktails inspired by the most popular Y2K fashion trends.

Originally called “hip huggers,” low-rise jeans are loathed for what is often seen as an unflattering fit. Yet, we were all wearing them. From Alexander McQueen’s “Bumster” trousers to bedazzled “Apple Bottom” jeans that got too low, the style appeared across MTV and the big screen. By 2010, waistlines had started to inch higher, but fast forward to Spring 2022 and low-rise jeans were back on the runway.

For a trend that is popularly unpopular, we chose a drink with a similar appeal: the Appletini. This vodka-based cocktail was created in 1996 at Lola’s West Hollywood Restaurant and is made with sour apple schnapps. The name is a bit misleading, as the drink is not a true martini.

Our version uses apple brandy, fresh lemon juice and elderflower liqueur to capture the original’s sweet-and-sour taste without taking a trip with 50 Cent to the “Candy Shop.”

Get the Recipe: An Appletini Recipe Worth Reviving

When Britney Spears and Justin Timberlake pulled up to the 2001 American Music Awards in head-to-toe denim, they made a fashion statement that the internet would never forget.

Double denim can be worn in many ways—layered denim jackets, denim bustiers, denim skirts, you name it. Unfortunately, the iconic former couple didn’t win any AMAs the year of their denim debut. Instead of crying a river, we opted for something dry and as widespread as denim.

Y2K was the heyday of martinis, and although many tended to be fruity concoctions, the dry martini, or Vodkatini, had its moment. Made with just vodka and dry vermouth, there is plenty of room to add layers of complexity.

Before the pandemic made matching loungewear a household sensation, celebrities like Paris Hilton and Jennifer Lopez sported bright-colored velour tracksuits. Juicy Couture paved the way, making imitation velvet a comfortable luxury worthy of posing in on the red carpet. These days, with multiple brands including Juicy are hopping back on the trend. Why not snag a hot pink set for brunch? After all, few things go better with cocktails and croissants than couture.

Nothing screams juicy luxe like a Bloody Mary. This combination of vodka, tomato juice, spices and other flavorings is a staple morning cocktail that has yet to decline in popularity.

Get the Recipe: The Ultimate Bloody Mary Recipe

The Ugg boot trend is another trend revived for the item’s comfort and nostalgia (and perhaps its perfect pair-ability with velour). The Australian brand is most known for its classic chestnut style, worn in the early 2000s by celebrities like Vanessa Hudgens and the Kardashians. Since the pandemic, stay-at-home fashion inspired a new wave of Ugg footwear—from platform slippers to a mini version of the original.

A pair of Ugg boots were one of the first items Oprah gifted on her well-anticipated “Favorite Things” show. Also among Winfrey’s favorite things over the years? The Lemon Drop Martini. She served a version of this cocktail at her 2005 Legends Ball—right in line with the Y2K ‘tini craze.

Get the Recipe: Lemon Drop Martini

Few (if any) style icons shaped how we dressed and drank quite like Carrie Bradshaw. The lead character from Sex and the City gained fame for her unforgettable outfits, which included a tiered tutu, newspaper dress and backward Chanel skirt. One of her most sacred pieces, however, was a Fendi baguette bag that became a must-have in the late 90s. While flashing the tiny shoulder bag at New York City nightclubs in the show, Bradshaw was even more so known for her drink order: “Another Cosmopolitan, please.”

And suddenly people were ordering Cosmos everywhere. Because if Carrie says the pink drink is cool, then it must be cool. The original recipe can be overly sweet, so we made a well-balanced version that, like the baguette bag, stands the test of time.

Get the Recipe: How to Make a Cosmo the Right Way

Teenagers like Hilary Duff and Mary Kate and Ashley Olsen were idols for many young girls, helping to shape Y2K style. While the butterfly motif was already having a moment in designer fashion, younger generations gravitated towards ever-more-colorful accessories. But right when we thought stores like Claire’s were outdated, influential figures of today like Olivia Rodrigo and Hailey Bieber are embellishing their hairdos with butterfly clips. Think childhood, but call it fashion.

Because the youth in all of us lives on, we suggest a cocktail with fruity jubilance like a Strawberry Daquiri. Our modern take on the classic adds complexity without losing its sweet nostalgia.

Get the Recipe: A Modern Take on the Strawberry Daquiri

If you “Wannabe” undercover, you gotta get with this trend. From retro shield shades to skinny oval frames, colorful sunglasses of all shapes and sizes were a go-to Y2K accessory. It wasn’t that the Spice Girls were trying to cast shade, but a rimless pair of orange sunnies completed any outfit.

Now, keep the spice and add salt to the rim with this spicy margarita recipe—a love affair of tequila and green chili bitters that is sure to “Spice Up Your Life.”

Get the Recipe: King’s Spicy Margarita

Between shiny puffers, silver flared pants and rhinestoned-everything, Y2K had big bling energy—especially in the hip-hop and R&B scene. Artists like 50 Cent, Jay-Z and Lil Wayne dominated the charts with songs that in one way or another spoke about money and the sparkling things it can buy.

And what would hip-hop lovers sip on while wearing flashy chains “In da Club?” Bacardi rum. Like it’s your birthday, of course. Our version of the classic rum-and-Coke incorporates Champagne for a celebratory fizz.

Get the Recipe: The New Rum and Coke

The one where “The Rachel” haircut goes viral. Jennifer Aniston’s signature hairstyle on Friends was a shoulder-length chop with voluminous layers that quickly became a trademark of the late 90s. After over a decade of being “on a break,” the flirty style recently resurfaced on TikTok with choppier draped layers. Enter “The Rachel” 2.0.

In addition to serving looks, Aniston’s character also poured coffee at the neighborhood shop Central Perk. Therefore, it only makes sense to choose a boozy brew: the Espresso Martini. This drink is a delicious choice (unlike Rachel’s Thanksgiving trifle).

Get the Recipe: How to Make a Real Espresso Martini

Whether you call them baker boy or newsboy caps, this trend is one of many confessions of the 2000s teenage drama queen. Yet it was worn across the board: from Sharpay Evans and Christina Aguilera to Fall Out Boy.

Some may find the look reminiscent of Depression-era newsies, which makes the Classic Old Fashioned a perfect complement. But if Katie Holmes and Gigi Hadid’s recent choice of hat is any consolation, maybe dated styles are exactly “What a Girl Wants.”

We hope these drink selections bring you some nostalgia. Any of them make the perfect pick next time someone asks to “Buy U a Drank.” Or even better, make it at home—in appropriate fashion, of course.