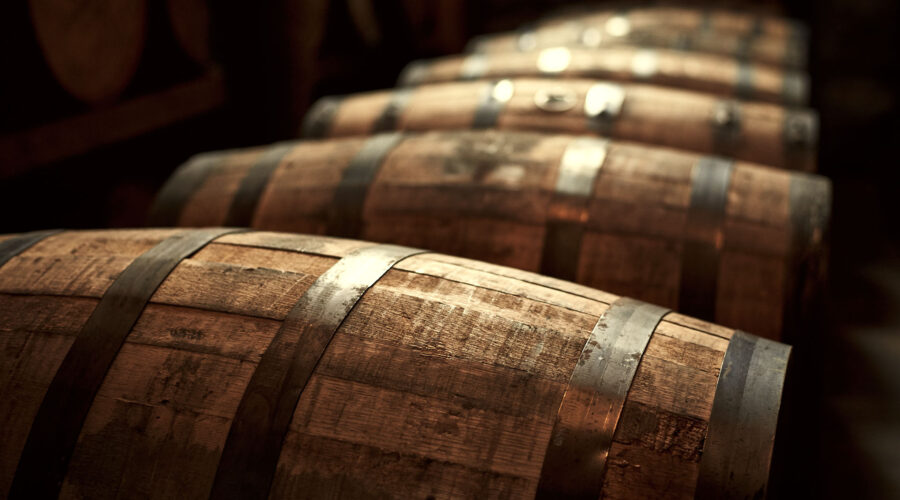 
One of the dreamier phrases you’ll hear in the drinks business, “angel’s share” is used to describe the amount of water and liquor that evaporates as a spirit matures in a barrel. It’s a naturally occurring side effect of the aging process that some but not all liquors undergo.

“Since the vaporization of a barrel’s contents is in the air, it’s described as being available only to ‘angels,’” explains Chris Morris, master distiller at Coopers’ Craft Bourbon in Kentucky. This impacts all barrel-aged spirits, he says, “but it’s the whiskey industry that’s embraced the term.”

The phrase has been used by distillers for centuries but became more popular in the 1970s.

To understand the meaning of angel’s share for whiskey, Cognac and other spirits, it’s helpful to explore how those liquors are made, and all the factors that distillers have to consider when creating their precious liquid.

While exact ingredients and steps vary, the process of making a distilled spirit starts with gathering raw materials. These include grain if you’re making whiskey, fruit for brandy or white wine for Cognac.

Once a distiller has what they need, they might smoke, shred or mill it before adding hot water and yeast to kick off fermentation. Next, they’ll distill the mixture one or more times in a pot or column still, depending on what they’re making, and pour it into wooden barrels to age.

As the liquid sits in its barrel, the angel’s share phenomenon occurs.

“Essentially, the cask breathes,” explains Jenna Elie, whiskey educator. “When things are maturing in a cask, as temperatures fluctuate, the liquid is moving in and out of the cask.”

If you’ve ever noticed a wood door getting stuck in its frame during the summertime, you’re familiar with the ways wood contracts and expands when exposed to elements like heat and humidity. That happens to barrels, too—and some of the liquid inside evaporates as a result.

The amount of water and spirit that evaporates during the aging process depends on several factors. Firstly, liquor that’s kept in barrels for longer periods of time loses more to angel’s share than those with shorter maturation periods. Producers can and do decide to age certain distillates longer than others for all sorts of reasons, including destination- and spirit-specific regulations. Cognac and bourbon must mature in barrels for at least two years, for instance, while Scotch has a three-year minimum.

Climate is another consideration. If barrels are kept in a consistently cool environment, the liquid inside them will neither age nor evaporate as quickly as it would in barrels intermittently or constantly exposed to heat and humidity.

“If you age a whiskey in Texas, it’s going to mature a lot faster than in Scotland, where the temperatures are cooler and you don’t get those huge surges over time,” says Elie. The angel’s share for a spirit made in Scotland might clock about 2–3% annually, she says, while it can be upwards of 5% each year in hotter destinations like Kentucky or Texas.

Microclimates also come into play. “Even if you have two distilleries within a mile of each other, the angel’s share can be very different,” she says.

Since aged spirits sit untouched in barrels for years before they can be sold, people who make them often have tight margins. As a result, many distillers try to anticipate angel’s share when plotting their production.

“Over time, a whiskey distillery will be able to calculate and therefore predict its angel’s share loss on an annual basis,” says Morris. “For example, if 1,000 cases are needed in five years, and your angel’s share is 5% per year, you will need to produce 25% more than you need to fulfill your predictions.”