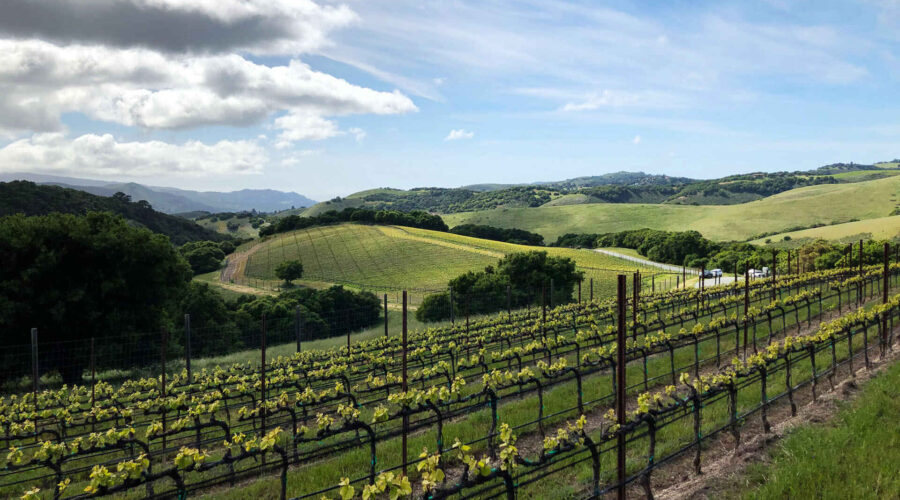 
In 1983, when the Carmel Valley was approved as one of the earliest American Viticultural Areas (AVA), the region’s primary focus was growing hearty Cabernet Sauvignon and Bordeaux varieties in the warm canyons that extend to the southeast, away from the frigid waters of the Monterey Bay. But in recent decades, with Pinot Noir’s popularity on the rise and many seeking fresher styles of wine, vintners began planting on hillsides that sit much closer to the sea, where steady ocean breezes keep temperatures cooler all year long.

Today, there are about 90 acres of mostly Pinot Noir and Chardonnay vineyards being grown on these exposed slopes, which are less than 10 miles from the Pacific Ocean and just outside of the northwest boundary of the Carmel Valley AVA. With another dozen acres in the works and the potential to more than double that acreage in the future, a small community of vintners—led by the owners of Pelio, Messier and Albatross Ridge vineyards—are now advocating for their own appellation to showcase this distinct terroir. In October, they submitted an application to the federal government to create the Carmel Coast AVA, which would encompass more than 4,100 total acres.

Something Different in the Air—and the Soil

“As far as Monterey County goes, this is the most exciting area that I get fruit from,” proclaims winemaker Greg Vita, who’s been consulting for wineries in the Carmel Valley and throughout Monterey since 1994. He first started working on these hillsides about 15 years ago at Holman Ranch, which sits just outside of the proposed appellation, but enjoys similar coastal influence. In 2014, Vita took over farming at Pelio and has been involved with the Messier project since it started in 2018.

While the temperature differences are quite obvious compared to the existing Carmel Valley appellation, Vita believes the Carmel Coast is also distinct from Monterey’s other maritime-influenced star: the Santa Lucia Highlands.

“The difference between the fruit is night and day,” says Vita. “The Santa Lucia Highlands has more cherry Lifesaver flavors and lighter tannins. You go to Pelio, which has really small berries and small clusters, and there’s a lot more tannin. The Chardonnays are much more Chablis-like—not a lot of fruit, but with more minerally, wet-granite characteristics that come through. Both the Pinot Noir and Chardonnay are extremely long-lasting, where I feel like the Santa Lucia Highlands wines tend to reach maturity much quicker.”

Garrett Bowlus stumbled into the region on a family vacation about 15 years ago, around the time he and his father were thinking of planting vines in Oregon. They learned that Pinot wasn’t picked there until late October, sometimes November, even with budbreak in March. “That was a good sign to us,” says Bowlus. “The hangtime is just crazy.”

He was further entranced by the soils, a chalky mix of sedimentary rocks, much of it uplifted ancient seabed full of diatomaceous earth. “When you walk up there, it’s all stone, just everywhere,” he says. “The project took on a bigger scale because it was so exciting.”

Instead of planting a handful of acres in Oregon, Bowlus and his father went all in, developing 25 acres of Pinot Noir and Chardonnay on windswept hilltops. They called the vineyard Albatross Ridge—a nod to a great-grandfather who flew sailplanes off these same ridges in the 1930s—and became the most public proponents for the region, even putting “Carmel Coast” on their labels.

The Montreal-born, Texas-residing engineering executive Luc Messier was also drawn to the region from afar. With the help of Etienne Grivot of Domaine Jean Grivot in Burgundy, Messier was looking from France to Oregon to Sonoma for a promising place to plant grapes.

“We love the terroir and the climate,” says Messier, who believes that the Carmel Coast will be less affected by global warming than other wine regions because of the deep, cold waters of the nearby Monterey Bay. They planted about 20 acres, split between Pinot and Chardonnay, and imported equipment from Burgundy to make the wines. “We’re doing it with New World fruit and Old World recipes,” says Messier, who was impressed with his vineyard’s inaugural fruit. “We are very happy with the first harvest. We think it will be very interesting.”

In addition to estate bottlings, these Carmel Coast vineyards sell fruit to winemakers such as Samuel Louis Smith, who uses both Pelio and Albatross Ridge in his eponymous brand.

“The combination of white shale and clay in this cool climate seems to achieve the perfect balance for what I’m trying to achieve: wines that are a bit leaner and more structure-driven, without being too bony,” says Smith, who’s also the winemaker at Morgan Winery in the Santa Lucia Highlands. “Regardless of winemaking style, this zone tends to promote wines with a bit more earthiness in the foreground, while the fruitiness plays more of a supporting role.”

Though the Carmel Coast buzz is relatively new, the Talbott family planted Diamond T Vineyard on these same slopes back in the 1980s.

“I was a trailblazer, for sure, because I was told by a lot of people that it was the wrong varietals and I was too close to the ocean and I wouldn’t be able to get my brix,” recalls Robb Talbott, who planted Chardonnay at Diamond T in 1982 and added Pinot Noir in the late 1990s. “I proved them wrong.”

The older vintages of those wines were riper than the styles made today, but they still carry the maritime hallmarks of the region. “You can taste the location, that natural freshness, the minerality and the saline quality of the wines,” says Bowlus. “They’re very unique and they speak to the soils and the closeness of the coast.”

Making the Case for a New AVA

To prove that the Carmel Coast deserves its own appellation, the vintners hired geographic consultant Patrick Shabram, who’s worked on numerous other AVA proposals across California, from the Sta. Rita Hills to the West Sonoma Coast. Though he lives in Colorado, his family moved to Carmel Valley when he was a senior in high school, so he knows the area well.

He found that Monterey shale and other sedimentary rocks dominate the landscape on the region’s ridges, making them distinct from the granitic soils found further down the valley. “The soil was a clear delineator, more than I was expecting to be honest,” explains Shabram.

He was even more surprised to discover how much cooler the Carmel Coast vineyards are, even compared to the western edges of the Carmel Valley appellation. He made those temperatures the primary argument in the application, which also includes two older, small vineyards closer to the valley floor at Folktale and Carmel Valley Ranch.

“You can actually see the waves crashing from Albatross Ridge,” said Shabram. “There’s nothing disrupting that movement of marine air.”

With the application submitted, the vintners must now patiently await the AVA approval process, which can take years even without any opposition or amendments. When it happens, Vita believes it will help the entire concept of Carmel wine.

“We’re dividing Carmel Valley like it should be,” says the veteran. “Most of the people in Carmel Valley proper are growing heavier reds, and this area is more for cool varieties like Chardonnay and Pinot Noir. The intensity we get is tremendous because of the slow ripening. It’s just a totally different than anything else in Monterey County.”