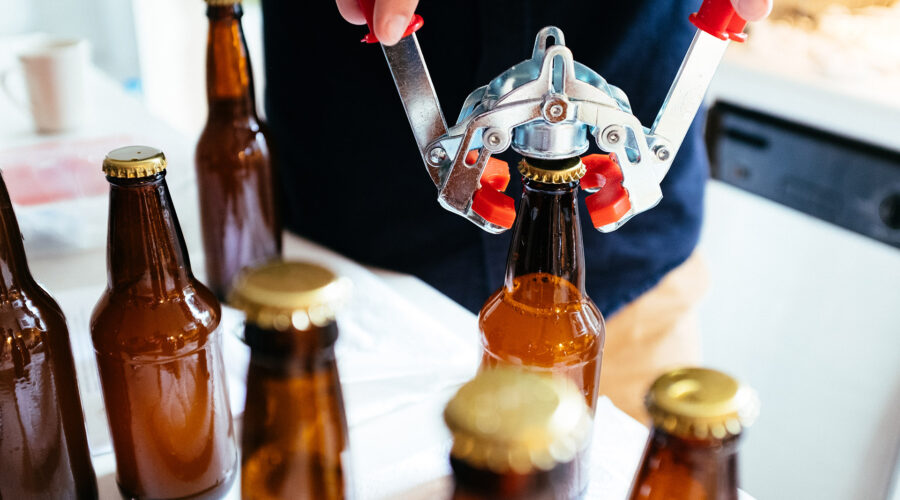 How to Get Into Homebrewing: Practical Tips to Grow Your Experience and Enjoyment


For Isaiah King, owner and head brewer at Gasper Brewing Co. in Bowling Green, Kentucky, his foray into making beer started with a Christmas gift from his dad in 2006.

The “Mr. Beer” kit from Rural King piqued his interest, although its initial outcome contrasted sharply with what he now makes at his brewery.

“The results were pretty horrible,” says King. “I forced myself to drink a few of them, but my dad really liked them.” By summertime, his retired father was giving him weekly kits to test. “By the end of that year, I was combining multiple kits for larger batches and soon transitioned to all-grain brewing.”

Will Glass, founder of The Brewing Projekt in Eau Claire, Wisconsin, started homebrewing while he worked for MillerCoors in hospitality and marketing. He and his wife would purchase a tavern that they turned into a craft beer bar.

“We knew there was a niche to be filled in our region by bringing in more rare [or] odd-ball types of beer that you couldn’t readily find at the time,” says Glass.

While some beer drinkers simply enjoy to sip a brew or take an occasional brewery tour, others like King and Glass are inspired to dive deeper and homebrew themselves. Here’s how to do it.

The initial investment depends on how serious you are about your new hobby. You can purchase a minimal homebrew setup for less than $100. Prices go up, depending on your level of commitment, and can range from $400-$500 for a more advanced kit.

More extensive designs that include features like basic automation, pumps, temperature control and stainless-steel fermenters can cost $3,000 and up.

While kits are available online, a neighborhood homebrewing store allows you to tap into local knowledge and ask questions as you begin.

You also need to factor in the cost of each batch. “Simple homebrew batches (that produce five gallons) will cost you around $30-$40 in ingredients,” says King.

If you think that homebrewing is a cheaper alternative to buying beer, you may want to reconsider.

“If someone gets into homebrewing to save money vs. buying beer at the store, they have already lost,” says King.

Get a Free (or Low-Cost) Education

King suggests Clawhammer Supply, which tackles issues like fixing a bad brew and provides recipes like a Marshmallow Milk Stout. Books by brewing experts like Charlie Papazian or John Palmer can also help novices get started.

To learn at your own pace, sites like Hopsonomy offer online classes, some of which are free. If you want to delve deeper, head to The Culinary Institute of America to experience in-person, guided learning.

And when all else fails, “GTS (Google that sh*t),” says Glass.  “I consider myself pretty handy, but occasionally something will break that I’ve never had to deal with before, and the internet is a vast resource.”

Make Friends With Other Brewers

Like-minded friends can enjoy sampling your experiments, but they can also help raise the quality of your end result.

“The best source of information I have found has been other people,” says King. He joined a local homebrew club, which offered camaraderie as well as insight and shared batches.

The American Homebrewers Association can help find brewers group in your area. The site lists more than 2,200 clubs. If your area is lacking, you can start a group of your own or join a social media group for brewers. A great resource is to visit local breweries and make friends with the brewmaster.

“When you have something break or have a question about a supplier, it’s good to lean on others’ experiences,” says Glass.

Tour Breweries to See the Process

It’s not only interesting to see how things are made, but it helps to understand the underlying process, especially when chemistry is involved.

While he lived in Hohenlimburg, Germany, King seized the opportunity to tour breweries. He spent his free time exploring, tasting and ultimately getting an education.

“When I returned to Bowling Green that fall, I started piecing together a highly advanced homebrew system,” he says.

Know the Laws in Your State

In the United States, alcohol is regulated, including what you produce at home. It’s a good idea to know regulations both on a state and national level. (The U.S. Treasury Department’s FAQ section is especially helpful). For example, your state may not allow you to give beer to others or take brews off of your property.

“Every state is different, and just because you think something [that makes] common sense would be legal, it might not be,” says Glass. “Ask the stupid questions because, in this industry, you’d be surprised to learn how many stupid laws exist.”

Learn From Your Misadventures

When you embark on a hobby, you may create something less than meets your standards. Don’t give up, but also don’t be afraid to ditch a batch.

“Put an immediate focus on quality, and don’t be afraid to dump beer that you think might not represent you well,” he says. This is especially important if you consider selling batches or opening a brewery.

“You should be in it for the long haul, and at the end of the day, it is sad to watch beer go down the drain,” says Glass. But he stresses that it’s much better to ditch a batch than forever lose a customer.

Have an Open Mind

Even if you intend to dabble, learn to say “yes” to opportunities. King’s entire journey was happenstance, from his unexpected holiday gift to being encouraged by a fellow brewer to enter a homebrewing competition, where he won both first and second place. That gave King the confidence he needed to keep brewing.

If brewing interests you, to start like King—with a simple kit—can satisfy your curiosity and see what your future holds. At the very least, you’ll have fun and get to enjoy the fruit of your labor.