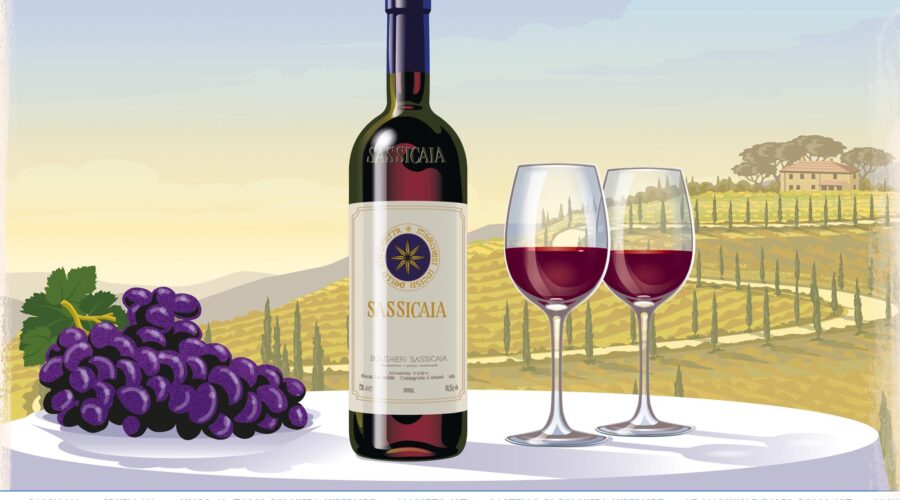 Inside the Iconic Red Blends of Bolgheri


Located on the Tuscan coast in the province of Livorno, the picture-perfect village of Bolgheri, dominated by its iconic cypress-lined avenue, now turns out some of Italy’s most celebrated wines. But it once seemed an unlikely place to birth Italy’s 20th-century quality-wine revolution.

Up until the mid-1900s, when its marshes were drained, Bolgheri was a malaria-infested backwater. Then, with no tradition of quality wine production, it became home to insipid whites and lackluster rosatos for decades. That reputation changed almost overnight in 1971 with the first release of Sassicaia, proof that Bolgheri’s microclimate and soils were ideal for red wines made from Bordeaux grapes.

The region’s stellar reds had to be labeled “table wines” despite their burgeoning reputation, since the zone’s antiquated DOC (Denominazione di Origine Controllata) regulations had no provisions for the Bordeaux varietals (or any reds at all). In 1994, the Italian government updated the rules to include these celebrated bottlings and created Bolgheri Rosso DOC and Bolgheri Superiore DOC (those must age at least two years before release). But the various Bolgheri DOC reds still had to be blends, until a modification in 2011. Many of Bolgheri’s celebrity reds are varietal wines created years before the revamped production codes and have long been labeled as IGT (Indicazione Geografica Tipica), a designation approved in 1995 and meant to encourage winemakers whose wines didn’t meet the stricter DOC criteria to stop labeling their prestigious offerings as table wines. However, many of Bolgheri’s celebrity bottle producers decided to keep their low-key status because their wines are as synonymous with Bolgheri as their DOC counterparts.

One of Italy’s most celebrated wines, Sassicaia is the brainchild of Marchese Mario Incisa della Rocchetta, who planted Cabernet Sauvignon at his Tenuta San Guido estate in Bolgheri in 1944. According to Nicolò Incisa della Rocchetta, Mario’s son and president of Tenuta San Guido, “My father loved fine Bordeaux and wanted to try making red wine. He chose the vineyards for ideal sun exposure and altitude but above all, for their rocky soils—similar to the gravel in Graves.”

The original plants were cuttings of 50-year-old vines from a friend’s estate near Pisa, long since pulled up. “Most of our vineyards are planted with this clone from these old vines that have had over a century to adapt to Tuscany’s climate,” explains Nicolò. For decades Sassicaia remained the family’s private stock, but Nicolò and his cousin Piero Antinori convinced Mario to sell it commercially starting with the 1968 vintage released in 1971. It was an immediate hit with critics and connoisseurs.

So important to Bolgheri is Sassicaia, that when the Italian government changed the production codes to include Bolgheri’s lauded reds in 1994, Sassicaia was awarded its own proprietary subzone. In 2013, another modification turned the subzone into a separate denomination, meaning Bolgheri Sassicaia DOC is now an autonomous appellation. Sassicaia is the only wine in Italy to hold this honor.

The estate that lends its name to Ornellaia Bolgheri Superiore was founded by Marchese Lodovico Antinori in 1981. A scion of one of Tuscany’s most famous winemaking families, Lodovico came to the area with the sole purpose of making great red wines like his uncle’s Sassicaia. After receiving the property just outside the village from his mother, Antinori cleared the olive trees and other crops and planted Cabernet Sauvignon, Merlot and Cabernet Franc.

Antinori was convinced the estate’s combination of sea breezes, warm temperatures and the mix of calcareous, clay and sandy soils rivaled conditions found in parts of California. A devoted admirer of California wine, especially of Napa Valley Cabernets, Antinori hired famed Russian-born André Tchelistcheff, known as the father of California Cabernet, as his original consultant.

Since then, the estate has changed ownership a couple of times. Owned by the Frescobaldi family since 2005, Ornellaia continues to express Bolgheri’s finest.

Made with Cabernet Sauvignon, Merlot, Cabernet Franc and sometimes a small percentage of Petit Verdot, Guado al Tasso Bolgheri Superiore is made by Piero Antinori and his family at their Guado al Tasso estate in Bolgheri.

First produced in 1990, the wine is made with grapes grown in alluvial soils that range from clay and sand to clay and loam with rocky deposits known as scheletro. The estate’s 790-acre property encompasses the Bolgheri Amphitheater, a plain surrounded by rolling hillsides facing the Tyrrhenian Sea that enjoys a high level of sunlight and a distinct microclimate. The estate’s vineyards “are located at the foot of the amphitheater, where cool nocturnal breezes freshen the vines,” says Albiera Antinori, president of Marchesi Antinori.

After meticulous grape selection, each vineyard parcel is fermented separately in steel then transferred into barriques to finish malolactic fermentation. In February, wine from the best vineyard blocks make the final blend that is then aged 18 months in new oak barriques. Boasting structure and finesse, Guado al Tasso also has great longevity—20 years or more in top vintages.

Though the estate has a long history of winemaking, it remained relatively unknown until Zileri took it over in the mid-1990s and resumed the family’s winemaking tradition. In 1995, he replanted estate vineyards with Cabernet Sauvignon, Cabernet Franc, Merlot, Syrah and Petit Verdot, releasing his debut 2001 vintage in 2004.

“When planted here in Bolgheri, these varieties make wines with round, ripe tannins and contain great minerality thanks to the mix of calcareous, clay and sandy soils full of very small stones and due to the intensity of the light reflecting on the sea,” says Zileri, who also serves as enologist along with Alessandro Dondi. He adds, “I also have property in the Chianti zone where I planted these same grapes, cultivated them and vinified them in the same manner. But the results were completely different, proving the importance of terroir.”

Masseto IGT has always broken the rules. Made with Merlot, it flaunts the Bolgheri convention of Cabernet Sauvignon-based blends. One of the greatest Merlots in Italy, Masseto IGT is distinguished by its rich fruit, structure and velvety texture.

Masseto, whose name derives from the Italian word massi, meaning large rocks, refers to the hard clods of clay that form the soils in the eponymously named vineyard, owes its existence to Lodovico Antinori, founder of Ornellaia, and André Tchelistcheff, the firm’s original consulting enologist.

While searching for vineyard sites, Tchelistcheff fell in love with a 17-acre parcel that he felt would be a match for Merlot. The hill, composed mostly of compact bluish-gray clay, lay just outside of the Ornellaia estate’s original borders. Convinced by Tchelistcheff that the site would yield stellar Merlot, Antinori acquired the plot and planted Merlot. After an experimental bottling in 1986 showed incredible potential, Masseto’s first official release was the 1987 vintage. Thanks to its opulent fruit and complex aromas of enveloping tannins, it was an overnight success.

“Masseto’s soul and backbone come from the compact clay in the central part of the hill, while the hilltop is sandier and rockier, adding elegance,” says Axel Heinz, Masseto’s estate director. “Clay and sand at the bottom also help smooth out Masseto’s tannic structure.”

Fermented in concrete tanks and barriques, Masseto then undergoes malolactic fermentation in all new barriques, and after the final blending of all the separate lots, ages 24 months in barriques and one year in bottle before hitting the market.

Owned by Marchesi Frescobaldi and formerly part of the Ornellaia estate, in 2019 Masseto became independent, complete with its own avant-garde vinification and aging cellars.

In some recent vintages, Masseto has contained a small percentage of Cabernet Franc. “We planted Cabernet Franc several years ago and now the vines have the age and quality to add to Masseto, but clearly Masseto will remain predominantly Merlot. We’ll decide each vintage whether or not to add a small amount of Cabernet Franc,” says Heinz.

If you are a Cab Franc devotee, there’s an excellent chance you’ll love Le Macchiole Paleo Rosso IGT. It even has its own global fan club: Amici del Paleo.

Made entirely with Cabernet Franc, Paleo is named after a wild herb that grows along the Tuscan coast. First released in 1989 as a blend of mostly Cabernet Sauvignon with a small amount of Sangiovese, in 1993, Le Macchiole’s founders, Eugenio and Cinzia Merli, decided to add Cabernet Franc into the mix. The wine’s destiny took a new turn in 2000, a scorching vintage. To add more fresh acidity and energy, the estate increased the amount of Cabernet Franc to 30% of the blend—with thrilling results.

Since 2001, Paleo Rosso has been 100% Cabernet Franc, risky given the grape’s reputation. “Cabernet Franc is often seen as the unfortunate younger brother of Cabernet Sauvignon,” says owner Cinzia Merli, “since it’s greener, more unrefined, untamable, and difficult to work with. But in Bolgheri, Cabernet Franc is transformed into something different: It’s very fruit forward, surprisingly fresh and has soft tannins.”

Michele Satta Il Cavaliere IGT, made with 100% Sangiovese, shook up Bolgheri’s status quo as a hotbed for Bordeaux varieties with its debut vintage in 1990. It proved that Tuscany’s ubiquitous red grape (and the most planted red variety in all of Italy), could excel in this slice of coastal Tuscany.

Michele Satta fell for Bolgheri in 1974 while traveling around Tuscany in his family’s camper during summer vacation. A native of Varese in northern Italy, Satta prolonged his trip to stay for the harvest at a small farm, then transferred from the University of Milan to the University of Pisa to be closer. After graduating with a degree in agronomy, he began working at a local winery in Castagneto Carducci about seven miles outside of the hamlet of Bolgheri, eventually founding his own winery in 1983, finding land and building the cellar in 1987 and planting his first vineyard in 1991—to Cabernet Sauvignon and Merlot, but also Syrah and Sangiovese, which he thought “could be great expressions of Bolgheri’s Mediterranean terroir.”

Traditionally, Sangiovese grown in Bolgheri’s growing zone had been used to make rosatos. Satta proved that Sangiovese cultivated in Bolgheri can yield full-bodied reds with depth, elegance and longevity. “Sangiovese is more vigorous than Cabernet Sauvignon and requires more work in the vineyards. It needs more space and more green harvests to control yields and generate quality,” explains Satta.

Fermentation, including 30% whole clusters, is carried out with native yeasts in large, open oak vats followed by 12 months aging in concrete tanks. The results are full-bodied, polished wines with juicy flavors, saline notes and supple tannins.

Because the current regulations don’t allow a 100% Sangiovese to be labeled as a DOC, Il Cavaliere is an IGT. “It’s time we focus on the essentials, which is the origin of the wine, not the grapes or blend,” says Satta. “Because Il Cavaliere is a true Bolgheri wine. It shows its Mediterranean character that sets it apart from Sangiovese from other areas.” 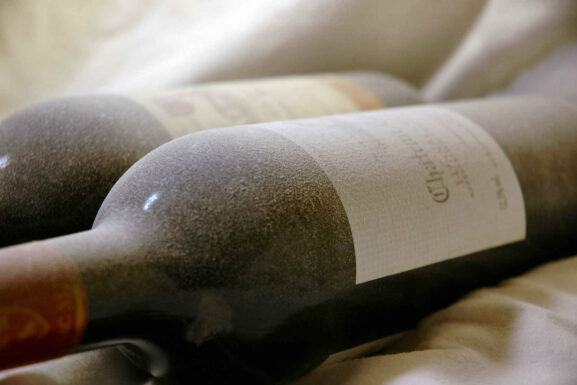 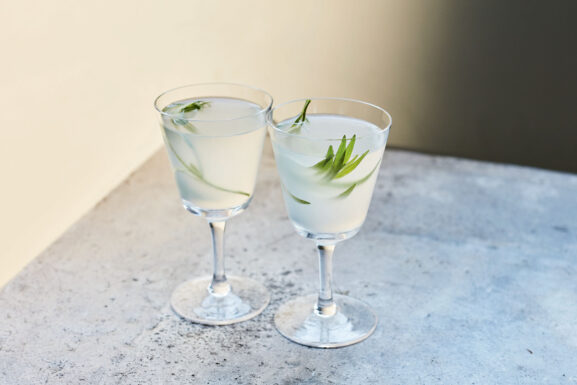