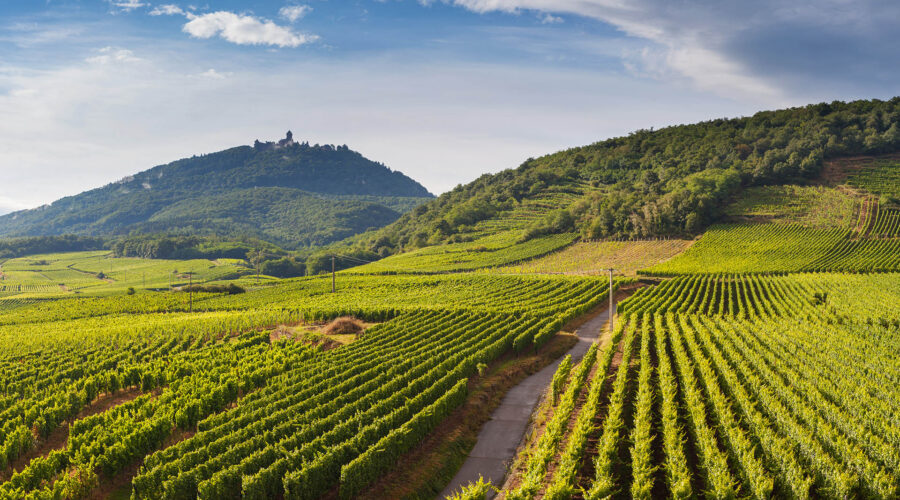 ‘Organic Was Too Easy’: Why Alsace Is Leading the Biodynamic Charge


In Alsace, France, where vineyard land is often passed down for generations, a sense of stewardship is palpable. This comes through in practices like handpicking the steep slopes and organic farming. It’s also apparent in the notably high number of wineries that use biodynamic practices in the vineyard, cellar or both.

The region accounts for 12.8% of France’s certified biodynamic vineyard area, even though Alsace represents less than 5% of the country’s vineyard acreage, at roughly 39,000 acres. Among its wineries, 88 have Demeter certification, one of the few biodynamic accreditations recognized globally. And as of 2021, 21 wineries are certified by Biodyvin, given only to biodynamic farms or those that commit to convert.

So how did biodynamics gain such a foothold in the region?

In 1924, as Rudolf Steiner was developing the system of biodynamic farming in Austria, Alsace was replanting and recovering from 50 years of German occupation, as well as phylloxera. It would take the region another half-century or so to get Appellation d’Origine Contrôlée (AOC) status and begin to implement Grand Cru designations for some of its vineyards.

In other words, biodynamics was not at the forefront of most winemakers’ minds when Steiner was out spreading the word.

Marie Zusslin, of Domaine Valentin Zusslin, represents the 13th generation to run her family’s winery. She says that her father converted to biodynamics in 1997, three years before he handed the reins to Zusslin and her brother. After her father attended a workshop in 1996, he immediately planned to convert all the plots at once.

“Organic was too easy,” she says, which echoes a sentiment from Séverine Schlumberger, co-owner of Domaines Schlumberger, that difficulty makes things better.

Maxime Barmès, of Domaines Barmès-Buecher, whose family has owned its vineyards since the 1600s, says his father also converted to biodynamics following a masterclass in the mid-1990s.

Neither Zusslin nor Barmès remembers who led the classes or where they were held.

This particular CFPPA is in the Alsace town of Rouffach. These centers for adult education exist throughout the country, including one in Beaune and another in Gironde. It’s unclear who taught the Alsace classes or why they proved so popular. But with Steiner’s Goetheanum, the world center of biodynamics, little more than 30 miles from Rouffach, it’s not hard to imagine that people were curious.

By the 1990s, there was some precedent for biodynamics in Alsace. Domaine Eugène Meyer converted in 1969 and got its Demeter certification in 1980. Meyer’s shift came after he suffered optic nerve paralysis after the use of conventional spray in the vineyards. A homeopath recommended that he try biodynamic farming instead.

He was followed closely by Domaine Pierre Frick. Jean-Pierre Frick, the 12th generation of his family to run the winery, took over in 1970. He converted the winery to biodynamic farming in 1980, and it became Demeter certified in 1981.

While the exact reasons why winemakers took these classes might not be known, what’s clear is that something during the 1990s moved several producers to convert to biodynamics. Domaine Mittnacht Frères converted in 1999, and it received its Demeter certification in 2013. Domaine Ostertag became certified in 2004. Jean-Baptiste Adam began to convert in the late 1990s.

Countless others may adopt some or all biodynamic practices without pursuing certification. Mélanie Pfister, of Domaine Mélanie Pfister, falls into this camp. Certification is expensive, she says, and while she may do it eventually, it’s not a priority at the moment.

Vineyards here are often small and share hillsides with each other. It’s possible that peer pressure may also be a factor. Arthur Ostertag, of Domaine Ostertag, practices organic and biodynamic farming. He says it’s a concern when nearby vineyards spray conventional treatments, but he doesn’t make a fuss about it.

In large part, however, the move to biodynamics seems an extension of producers’ pride in their pristine terroir and a desire to maintain it as long as they can in the face of the climate crisis.

Cover crops in between rows, for example, feed soil biome and offer some protection against erosion. It also offers botanical nuance to the wines. The ethos here is to care for the land and let it speak through the wines. Biodynamics is just one tool to achieve that.