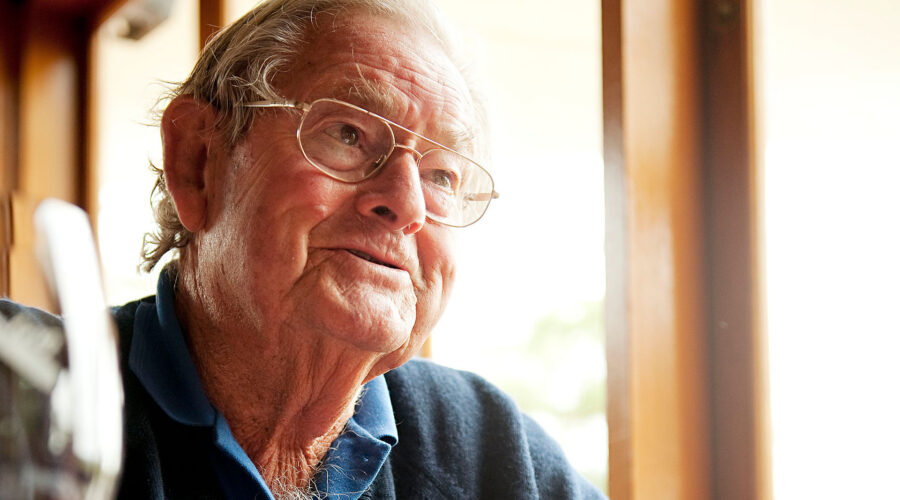 
Third-generation South Australian winemaker Francis d’Arenberg Osborn—widely known as d’Arry—passed away on December 16th at the age of 95.

Credited as one of the founding fathers of the modern McLaren Vale wine industry, d’Arry grew his family winery, d’Arenberg, from bulk producer to one of the world’s best known Australian labels over the course of 70 consecutive vintages. In turn, he played a significant role in shifting the perception of McLaren Vale as a bulk wine growing region to one capable of premium wines on par with those from neighboring Barossa Valley.

In his 95th year of life, d’Arry could still be seen mowing the property’s lawn, talking with guests in the tasting room and traveling around many of the 90 countries to which d’Arenberg exports. He often appeared alongside his son, Chester Osborn, who took the winemaking and viticulture reins from his father in 1984.

“We had an amazing relationship,” says Chester Osborn. “He was a great raconteur. He could talk and talk forever and it was usually quite funny.”

Over the span of his long career, both d’Arry the man and his wines won numerous awards. They include one of Australia’s most prestigious, the Jimmy Watson Trophy, in 1969 for d’Arenberg’s 1968 Cabernet Sauvignon. The man himself was given the Queen’s Jubilee Medal in 1978 and a Medal of the Order of Australia in 2004, to name a few honors.

The success is especially remarkable considering both d’Arry’s and his wines’ humble beginnings.

D’Arenberg began as a vineyard, initially called Bundarra, where eight acres of Shiraz and Grenache were planted in 1912. They were placed in the ground by d’Arry’s grandfather, Joseph Osborn, for his son, Francis (Frank), who built the winery in 1927. The wine was sold in bulk to local producers. When Frank fell ill in 1943, his son, d’Arry—whose mother and namesake died on the same day he was born—left school at the age of 16 to run the winery and vineyards. He worked without electricity, using generators and pumps powered by kerosene, and without a plow; the vineyards were tilled by horse until a rubber-tired tractor was purchased in 1946.

In 1959, d’Arry launched his own label, d’Arenberg (the name “Bundarra” was dropped in 1965), introducing the now globally recognized red stripe on the wines’ labels. He built not one, but two, tasting rooms in the span of two years in the 1960s. With no formal wine training, d’Arry learned on the job, soaking up the knowledge of his peers.

“Dad was not trained as a winemaker,” says Osborn. “He’d say he used to make wine by the seat of his pants. His winemaking was developed by the people that he sold bulk wine to. They’d come into the winery and tell him, ‘You need to change that metal must line to plastic’ or ‘You need to add sulfur dioxide at this or that stage.’”

As d’Arry’s winemaking style took form, so, too, did his wine preferences.

“He didn’t like Pinot Noir,” Osborn laughs. “He thought it was light and pissy. He loved Grenache, of course,” he says, referring to the variety and style (fruit forward-yet-powerfully structured, with old oak and always basket pressed) for which d’Arenberg—and, varietally speaking, the McLaren Vale region—has cheered for most loudly.

However, as a person, d’Arry was anything but loud.

“As a man, he was a very gentle,” recalls Osborn. “He never raised his voice to me.”

“He was humble and was always a laugh,” says Rob Buono, president of Old Bridge Cellars, d’Arenberg’s U.S. importer of nearly 30 years. “He loved getting after Chester about the amount of money he spent on wine, or just about anything. He was frugal, as were many of the Depression-era generation, but so generous with time, and always with a story.”

“He measured the success of a business by how much debt it had,” says Osborn. “Ours didn’t have any…He taught me that I have to justify spending money.”

When the 4th-generation Osborn—and the family’s first trained winemaker—took over production, he pushed d’Arenberg’s viticulture towards lower yields, dry farming and organic and biodynamic principles. At first, d’Arry resisted.

“He said, ‘Well, we better sell the vineyards now before I die so we can get something for them.’ He was really surprised that the vines didn’t die and they flourished, because we weren’t sterilizing the soil until it was dead,” Osborn recalls. “He believed in me, which was a beautiful thing.”

Today d’Arenberg is the largest biodynamic-certified winery and vineyard in Australia. It’s also one of the most recognized and visited wineries in the country, thanks in part to the fame of the wine and the winery’s Willy Wonka-like Cube, a multi-sensory, multi-level tasting room and events space that towers over the landscape like a Rubik’s Cube dropped by a giant in the middle of the vineyards. The Cube was the creation of Chester Osborn, but it was d’Arry who laid the groundwork for a label that embraced both traditional winemaking and a hefty dose of fun.

Buono remembers a moment when d’Arry shared with him the winery’s business philosophy:

“It was focused on people, not pretension; it was about being a farmer who loved the land, not a corporation. [D’Arry] was a class act; a gentleman and a fair-minded businessman. It won’t be the same in McLaren Vale with the absence of one of the guys that helped put it on the map in the first place.