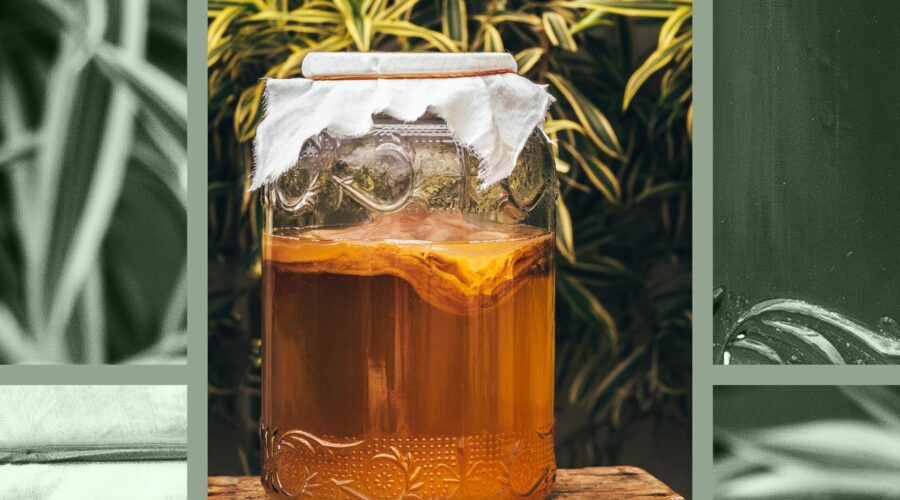 
Last autumn there was a small and well-curated beer festival held in Nashville. The host, Yazoo Brewing, had brought together brewers from across the country and imported beers from around the world in a celebration of funk— those good microbes that make fantastic beer.

Amid the lambics and gueuze, the saisons and mixed cultured ales, I found myself repeatedly drawn to the Harvest Roots table, a Birmingham, Alabama outfit specializing in kombucha. As an open-minded drinker, I’ve dabbled in the booch from time-to-time.

I can appreciate the skill involved and admire the presence of probiotics—even if an eyebrow is raised to some of the too-good-to-be-true good-for-you claims. I just generally gravitate toward other imbibables. Yet here I was at a world-class beer fest—drawn to this hippie vinegar.

I was not alone. Attendees lined up to speak with Pete Halupka, who co-founded Harvest Roots in 2013 with his wife, Lindsay Whiteaker. As he poured samples of his small-batch booch, flavored with all manner of ingredients from ginger and yuzu to flower blossoms and hops, he extolled the virtues of the liquid pouring from the stubby 12-oz. bottles, speaking passionately about fermentation and microbes.

Traditional kombucha is made by steeping tea (and sometimes other botanicals and ingredients) in hot water and then resting the liquid in a Symbiotic Culture of Bacteria and Yeast (SCOBY)—a living product. The SCOBY consumes sugars in the liquid, creating trace amounts of alcohol and helps create the CO2 that gives it a little fizz and creates acids. Higher sugar levels result in a beer-like abv.

In the moment I went back for another pour of this tangy, fizzy concoction, it clicked for me. The early days of craft beer in America were an uphill battle for the small producers going against the large, well-established companies. The story is familiar and well-trodden: Smaller meant more choice and diversity of flavors versus one-size-fits-all bland lagers. To this day, much of the innovation, taste and excitement in beer comes at the boutique level. So, too, has been my experience with kombucha. Larger national and regional brands often fail to capture the small-batch spirit that can make this fermentated product so interesting and exciting.

SCOBY can be scaled up, but it is about the creation of a house culture that is unique to its producer that makes kombucha most interesting in my mind. It is in small-batch fermentation where microorganisms can add character and flavor to a final sip that can’t be matched elsewhere. The allure of a good kombucha is in this quality and the connection to where it was made.

Harvest Roots comes out of a 5,000-square-foot facility that includes an ample taproom where it pours its booches or fills growlers to go. When they started, Halupka and Whiteaker foraged for ingredients but have since gone a more conventional route as the business grew. Their fermented goodness still highlights their artisan approach though.

GPS says Harvest Roots is a good 14-hour drive from my home, so I won’t be popping in for a pint regularly. But it has encouraged me to seek out small-batch options locally while I wait for the next beer festival to roll around.