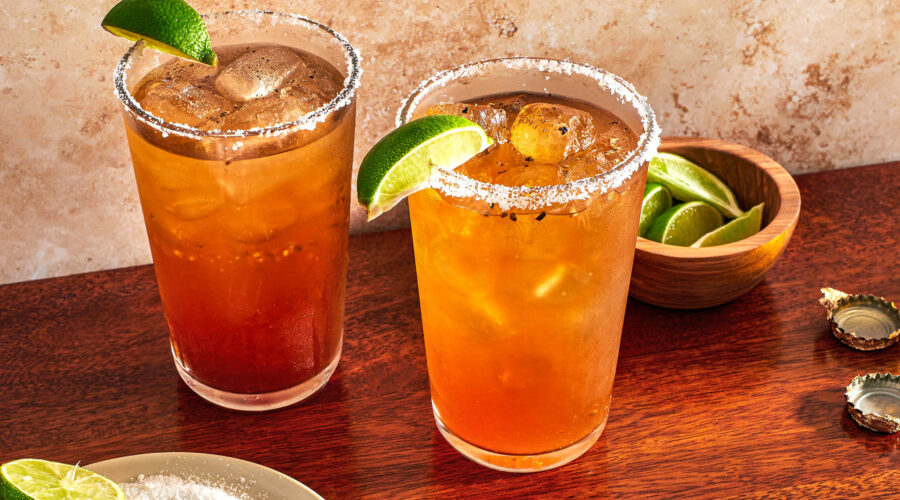 
Hailing from Mexico, the michelada has become a staple in bars across North America. And for good reason.

This drink not only brings together the refreshing flavor and tang of Mexican lager mixed with lime, but it’s also entirely customizable.

Here’s how to make just one version of the michelada, a look at two of its origin stories and more.

The History of the Michelada

Like so many drinks, this cocktail’s origin story is murky. According to the Los Angeles Times, the most repeated version traces its origins to Club Deportivo Potosino, a country club in central Mexico. As the story goes, Michel Esper Jorge, a club member, showed up for a round of tennis hung over and asked a staff member to bring him a “glass full of ice, some lime juice, some assorted condiments and a bottle of beer.” And just like that, supposedly, the cocktail as we know it today was born.

However, adding citrus and other ingredients to beer was likely happening in Mexico long before Jorge struggled through a tennis match. As Alonso Ruvalcaba, a food writer and author of the book 24 Horas de Comida en la Ciudad de México, told the L.A. Times, “at one point or another, it was just going to happen. Someone somewhere was going to decide to start putting acids into a beer.”

Some believe the drink’s origins go even further back. Another story suggests that the drink dates to the Mexican Revolution in 1910. Reportedly Don Augusto Michel, a general, gave his soldiers beer spiked with added lime and hot sauce.

As for the name, “michelada”: According to the Oxford Companion to Spirits & Cocktails, one theory is that the name is derived from the Spanish words for “my cold blonde.” In this case, blonde is “referring to a light beer, such as a lager or pilsner.” It’s also plausible that “chelada” is simply a “Spanish adaptation of the English word ‘chilled.’”

These days, the drink is a brunchtime staple—alongside drinks like the Bloody Mary, Bloody Caesar, mimosa and more.

How to Make a Michelada

1. Rim outside of a pint glass with lime. Pour salt in a small plate or bowl, tilt the glass at a 45-degree angle and roll the outside until the entire rim is covered.

3. Add Worcestershire sauce, soy sauce, black pepper and as much beer as desired. Stir until all combined. Keep adding any remaining beer as you sip. Garnish with lime wedge.

How Do You Drink a Michelada?

How you drink a michelada is entirely up to you. Like a Bloody Mary, there are a few base ingredients—lime, beer and salt—but after that, it’s entirely customizable. Feel free to play around with the Mexican lagers, add extra Tabasco sauce or toss in sliced jalapeños for some added spice. You can also play around with the amount of soy or Worcestershire sauce, which will impact the drinks umami flavors. Some folks even throw in briny Clamato juice.

Just be sure to serve it in a pint glass so you have plenty of room for all your ingredients.

What Are the Best Beers for a Michelada?

Like just about everything else with this drink, it depends! But it’s generally best to go with a Mexican lager for its light, crisp flavor profile and touch of sweetness.

For lighter takes, reach for a Modelo Especial, Carta Blanca, Sol, Reuben’s Southsun or even a Sam Adams Lager. If you like drinks on the darker side, try a Negra Modelo or Ska Brewing’s Mexican Style Dark Lager.

Are Micheladas the Same As Bloody Marys?

Nope! A michelada is a mixed drink made with beer, lime juice and hot sauce. A Bloody Mary, on the other hand, is generally a spiced mixture of vodka and tomato juice.