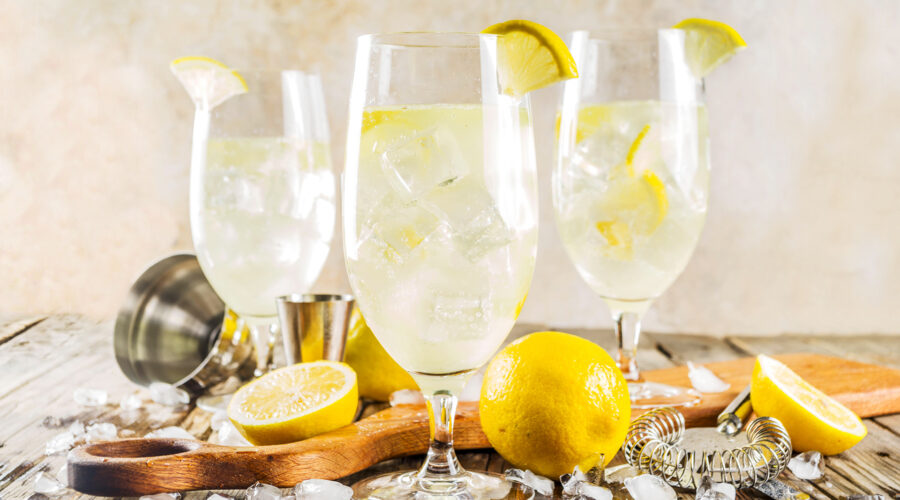 What Is St-Germain and How Do I Mix With It?


St-Germain gives the appearance of a centuries-old concoction with a colorful origin story similar to other French liqueurs like Chartreuse or Cointreau. But despite its Art Deco-styled bottle and vintage-inspired branding, St-Germain is just 15 years old.

The elderflower liqueur was created in 2007 by third-generation distiller Robert J. Cooper. Its name and look are inspired by a Paris neighborhood, Saint-Germain-des-Prés, made famous by writers and artists during the Belle Époque era that spanned from the late 1870s to the outbreak of World War I in 1914.

How is St-Germain Made?

Made in France, each bottle is said to contain about 1,000 small white elderflowers from elder trees, or Sambucus nigra, according to the brand. The flowers bloom in the spring, and they’re handpicked in late May while at their peak flavor and aroma. Each bottle is numbered with the year that the petals used to make the liqueur were gathered.

The liqueur’s light-golden color comes from elderflower pollen. And while the spirit is sweetened, it contains no artificial flavors or coloring.

St-Germain’s flavor can be difficult to describe, especially for someone not familiar with elderflower, says Anthony Caporale, director of spirits education at the Institute of Culinary Education.

“Honeysuckle is probably the flavor most people would relate to; a honey, sweet, floral flavor,” he says. “Most people who taste St-Germain are going to walk away with sweet as the primary impression.”

St-Germain is considered a cordial, which is a sweetened distilled spirit that’s typically high in sugar.

With 20% alcohol by volume (ABV), St-Germain also contains notes of pear, citrus and tropical fruits, according to the company.

How to Drink St-Germain

St-Germain can add sweetness and citrusy, floral hints to any drink. It pairs well with spirits like gin, vodka and tequila, as well as with fruity flavors.

It can also be enjoyed by itself as an aperitif.

Here are eight ways to use St-Germain, according to drink pros.

Gin and St-Germain are well-matched, since gin has its own botanical, floral notes, says Carl Busch, mixologist and creator of Alchemix Bar. He suggests to combine cucumber, gin, St-Germain and Prosecco to create a refreshing cocktail.

2. Use St-Germain in a Margarita

The floral flavor of St-Germain goes well with blanco tequila, which also features its own citrusy, floral character, says Caporale. Subbing in the elderflower liqueur for triple sec in a margarita is one of his favorite ways to use the spirit. Just make sure you also add fresh-squeezed lime juice.

A classic French 75 contains gin, lemon juice, simple syrup or sugar, and sparkling wine. Christy Bradley, spirit guide at Commons Club at the Virgin Hotel in New Orleans, likes to add St-Germain for “a hint of sweetness and a twist of flavor.” This riff is sometimes referred to as a French 77. Bradley said that just a splash of St-Germain to bubbly can round out the dryness of the wine.

As a twist on a typical whiskey sour, Busch suggests to try it with St-Germain instead of whiskey. The result is a lower-alcohol drink that’s great for brunch.

He makes an elderflower sour with 2 ounces of St-Germain, 1 ounce of lime juice, a dash of orange bitters, and egg whites.

A simple way to try St-Germain is to incorporate it into any vodka and fruit-juice drink, like a classic screwdriver.

“The vodka kicks up the alcohol content in the St-Germain, and you’re adding honeysuckle and sugar to whatever it is,” says Caporale. “It’s pretty much a foolproof drink.” Just stick to a small amount of St-Germain, like a quarter- or half-ounce.

He suggests to sip on it at the end of a meal.

Vodka and gin are the most common liquors paired with St-Germain. But Busch says that it goes well with dark liquors, too.

He created a dessert cocktail, which he calls the Bazinga, named after the catchphrase on the sitcom The Big Bang Theory. The drink features 2 ounces each of St-Germain and Jim Beam Honey with an orange twist.

8. Use St-Germain as a Sweeter Sub in Just About Any Drink

St-Germain can be used in place of other sweeteners like simple syrups or cordials in many drinks, says Caporale.

“Cut your sugar back, add the liqueur, or take one liqueur out and substitute St-Germain,” he says.

In a Hemingway daiquiri, for example, try St-Germain in place of maraschino liqueur. “Just rum, whatever sweetener you want, some fresh lime juice, and that cane spirit—its sort of grassiness has those same sorts of plant notes and floral character, and handshakes beautifully with St-Germain,” says Caporale.