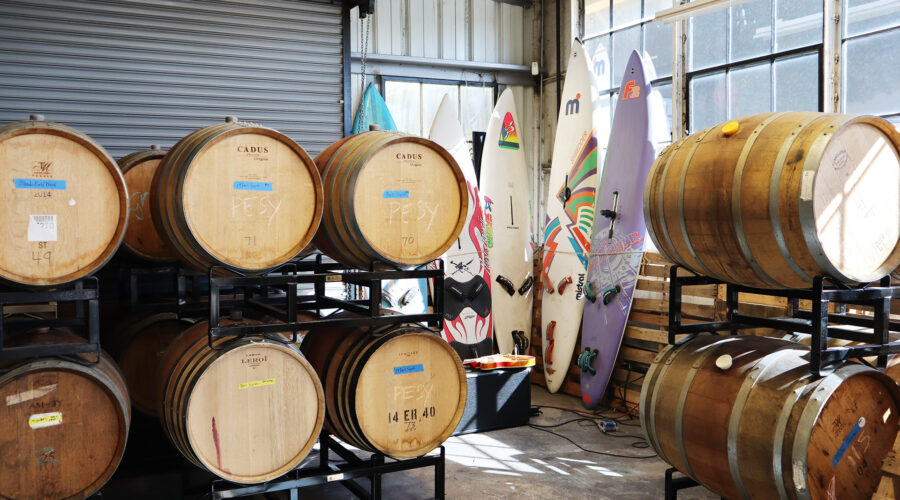 Why Berkeley Is the Center of America’s Biodynamic Wine


There’s a long history of activism in Berkeley, California, from the 1964 UC Berkeley sit-in that started the Free Speech Movement, to student campaigns against apartheid in South Africa during the ’80s. Now, this city just across the bay from San Francisco is in the midst of another revolution. This time, it’s wine.

Not far from where Alice Waters opened Chez Panisse and changed national conversations about farm to-table cooking, the Gilman District is home to Berkeley’s thriving natural wine movement. With eight wineries across slightly more than one square block, it could be the largest concentration of low-interference winemaking in America.

Though there’s been winemaking in the neighborhood for more than 40 years, many credit the push toward natural wine to Donkey & Goat Winery, started by Jared and Tracey Brandt in San Francisco in 2004. At the time, “natural wine” wasn’t a commonly used term in the U.S., Tracey says. “When we decided to move to France and learn how to make wine, we weren’t interested in conventional winemaking.”

Donkey & Goat sources only from biodynamic vineyards, and those whose sustainable, organic growing processes avoid chemical interference. The Brandts view their wines as an extension of those farming philosophies.

“Why do we make natural wine? Well, it’s the only thing we wanted to do,” says Tracey. “We just happened to be earlier than some when it came to carrying the ethos into the bottle.”

The decision to base their winery across the bay from San Francisco, in Berkeley, was a practical one: They needed to stay close to their day jobs.

“Given the degree to which we wanted to have our hands in our wine and the amount of attention we wanted to pay with regard to tasting and making decisions based on what we were tasting, we needed to be close,” she says.

Donkey & Goat’s wines include a Chardonnay pétillant naturel, Grenache rosé, Merlot, Cabernet Sauvignon, plus less-common varieties like Clairette, Roussanne and Mourvèdre. The Brandts design their wines to be food-friendly and encourage chilling of most of the reds, which tend to be lighter in character and designed to be enjoyed while young.

In 2011, the Brandts moved Donkey & Goat’s operation to a large renovated factory in Berkeley. The lofty space includes a tasting room and lively outdoor space where groups gather on weekends, and the winery neighbors several other natural and minimal-intervention wineries.

Just a few doors down, Chris Brockway, owner and winemaker at Broc Cellars, has been making wine in the neighborhood since 2008. “I became disillusioned with the California wine scene and the style of wines people were making,” he says. “I decided to go out on my own, forget everything I learned and start over.”

He sees natural, low-interference wine as a match to Berkeley’s culinary tradition. Chez Panisse and the restaurants it inspired, Brockway says, bought imported wine rather than local bottlings because it better complemented their simple, farm-to-table style.

“Everything being made in Napa and Sonoma was so heavy,” he says. “It didn’t match the food that was being prepared in this area.”

Brockway meticulously sources grapes from small vineyards in Northern California. Ask about Broc’s Trousseau Noir and you’ll discover that not only do the grapes come from Green Valley in Solano County, southeast of Napa, but also from the pesticide-free Wirth Ranch Vineyard. Grapes from there are taken from old Syrah vines that Brockway had grafted from another local vineyard first planted in 1888.

“I think these wines are a reflection of where I live,” says Brockway. “This town in particular — maybe it’s because of the school and the student population—there’s such a focus on having a lighter footprint in general, using alternative transportation, less plastic. It seems like this [style of natural winemaking] really reflects that.”

Broc produces a huge selection of lesser-known varieties, like Cabernet Pfeffer and a blend of Tocai Friulano and Trebbiano. These grapes tend to be more common in low-intervention wines than their conventional counterparts, Brockway says. The grapes lend themselves to that winemaking style, he says, and the typically smaller producers that use them are more able to experiment.

There’s a sliding scale of what qualifies as natural wine, but the term generally means that the wines don’t contain any unnaturally occurring additives. Enzymes, bacteria, nutrients and tannins can be added, but naturally fermented wine tends to eschew commercial yeast, which many traditional winemakers add after crush to kickstart the fermentation process.

Instead, most natural winemakers ferment only with wild yeast that come in on the grapes or live in the cellar.

“That brings an extra complexity element, a freshness and liveliness to the wine, if done properly,” says. Brockway.

With sulfites, though, things get a little hazy. Sulfur dioxide is almost always added as a preservative to traditional wine. It allows wine to age without anything unwelcome growing in the bottle. Wines without sulfur run a higher risk of spoilage in the cellar.

Because sulfites are produced naturally in the fermentation process, there’s really no such thing as a “sulfite-free” wine. There are just wines with added sulfur dioxide, and those without it.

Donkey & Goat and Broc Cellars use extremely low doses of sulfites in some of their wines. Both offer a selection of “zero-zero” bottlings, in which nothing was added to the wine, nor was it filtered or fined.

“I fall more on the minimal-intervention side. I’m just a little reluctant to officially join the club of natural winemaking because I think that there are some misconceptions about it,” says Dave Gifford, owner and winemaker at Windchaser Wine Co. “I would rather just have an honest discussion with my consumers” about his winemaking practices.

Windchaser’s current releases are Grüner Veltliner, Sauvignon Blanc, Chardonnay, a Mauka Makai white blend and whole-cluster Pinot Noir. Gifford uses no added yeasts and doesn’t filter his wine. Many natural winemakers believe that filtering a wine changes its character. That’s why many low-intervention wines are cloudy or have sediment.

“I believe in sulfur,” says Gifford, “but 30 parts per million (ppm) is my standard dose,” which is on the extremely low end of what can be added. Sulfites in U.S. wine are capped at 350 ppm. “If I can make a slightly better wine with that level of minimal intervention, that’s something I’m okay with.”

Windchaser set up shop in 2017, and Vinca Minor opened on the same block two years later. In a building on nearby Camelia Street, there’s a wine collective that has seen most of Berkeley’s winemaking history. It’s where most of Berkeley’s winemakers made their early batches when they were just starting out. Currently there are Lusu Cellars, Whistler Vineyards and Eno Wines. If you travel another mile, you’ll find Covenant Wines and Hajdu Wines.

“When I started trying the wines, I thought, ‘This is amazing,’” says winemaker Jason Charles, who owns and operates Vinca Minor with his wife, Emily. He trained at a biodynamic winery in Bordeaux before he opened his own label in Berkeley. “You could feel something, taste something that was real. It was electric. It was vibrant.”

Vinca Minor’s low-intervention wines average about 10–15 ppm of added sulfites, and there are some with none at all. “If you go to Safeway and grab a random bottle on the shelf, that might have 300 ppm along with 20 other products in there to stabilize the wine,” says Charles.

“The people who come in to taste are very thoughtful,” says Charles. “They know about wine. They get excited. We see them return, and they live right around the corner. It’s a great neighborhood of merging cultures.”

Not so far away is Vintage Berkeley, a wine shop housed in an old water company pump house in the North Shattuck area near Chez Panisse. There, you’ll likely find young wine nerds excited to open a bottle of no-dosage sparkling Listan Negro Rosé from the Canary Islands, which is sustainably farmed and has no added sugar. The second fermentation, which adds the bubbles, is done with grape must.

That kind of modern, untraditional wine tastes right in a city like Berkeley. It tastes like the future. 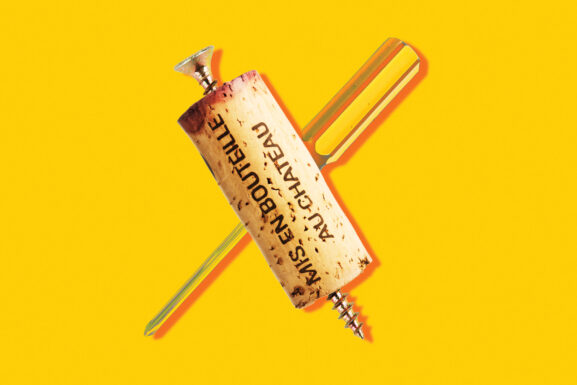 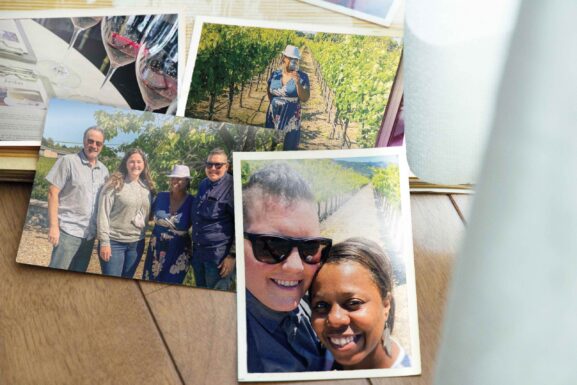