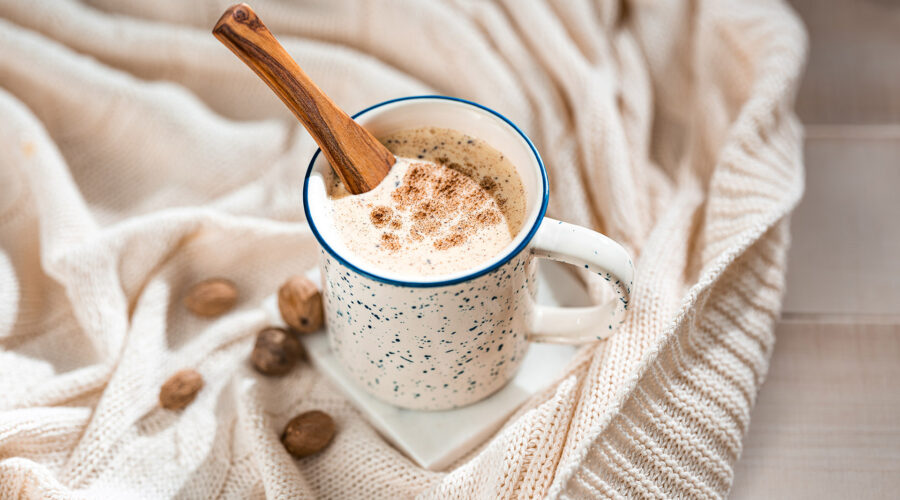 
A telltale sign that the holidays are officially upon us? Store shelves have made room for cartons upon cartons of eggnog.

Celebrating with this creamy beverage however is nothing new. In fact, eggnog has been served up at bars around the holidays for centuries. And drinks like posset, which many culinary historians believe gave way to the modern beverage we know and love today, were drunk at celebratory occasions centuries before eggnog made its way into American bars.

So in keeping with tradition, it’s only right to whip up some eggnog drinks this winter.

From vegan nog to classic eggnog, here are the best eggnog cocktails to spice up your holiday season.

What Are Eggnog Cocktails?

Eggnog cocktails are endlessly customizable. They tend to be boozy, sweet and have hints of spice.

A myriad of spirits like brandy, Cognac and bourbon lend themselves well to eggnog cocktails. But the classic choice is rum. Why? Because this spirit pairs perfectly with eggnog’s nutmeg and cinnamon aspects.

How to Make Eggnog Cocktails

How you make your eggnog cocktail is going to vary based on your ingredients and chosen recipe. But in general, they incorporate eggs, simple syrup, a spirit and dairy products. On this list, we have eggnog cocktail options that range from warm and spicy to a custard-like dessert.

However, if eggnog isn’t really for you, be sure to check out our mulled wine, mulled beer and other festive fortified cocktails that are perfect for the holidays.

Jump to a Recipe

Sometimes it’s just best to stick to the tried-and-true classics. You definitely can’t go wrong with this traditional take on old-school, chilled eggnog. While this options calls for the staple ingredients, like Cognac, rum or bourbon, feel free to play around opt for fortified wine like Port instead. Want something lighter? You can also swap out the cream for milk.

Get the Recipe: A From-Scratch, Classic Eggnog Recipe and How to Jazz it Up

Sometimes, you’ve just got to heat things up! While our classic eggnog is served cold, this one comes piping hot. It’s basically like melted ice cream, and while that may sound off-putting to some, we suggest you try it before saying anything you can’t take back. Think of like a boozier crème anglaise, or classic vanilla custard sauce. Not bad, right?

Just be sure to mix the warm milk into the eggs slowly, so the ingredients combine without cooking the yolks.

Get the Recipe: Hot Nog Recipe

Just because you’re vegan doesn’t mean you should miss out on this classic holiday beverage. Instead of dairy products, this recipe calls for cashews along with almond and coconut milk. It also calls for bourbon, which is largely considered vegan. (Just make sure to check the label before imbibing.)

Get the Recipe: Vegan Nog

Unlike other recipes on this list, this one is going to take some patience. It needs to age a least a month—if not more!—before imbibing. But we promise it’ll be worth it. Along with a whole host of spices, like ground ginger, cloves, nutmeg, allspice and more, this recipe calls for a variety of spirits like Bayou Spiced Rum, applejack and others.

The end result is similar to zabaglione, a thick, custard-like Italian dessert.

Get the Recipe: Creole Eggnog

This drink originated in Puerto Rico. Its name, “Coquito,” translates to “little coconut, which is fitting as the recipe calls for both coconut milk and cream of coconut. Along with a host of spices like ginger, nutmeg and clove, you can also mix in fruits like strawberry or tamarind.

Get the Recipe: Coquito